Alejandro Inarritu has won top honors from the Directors Guild for his film "The Revenant." The award has often proven to be a strong prognosticator for the Oscars, which will take place at the end of February. 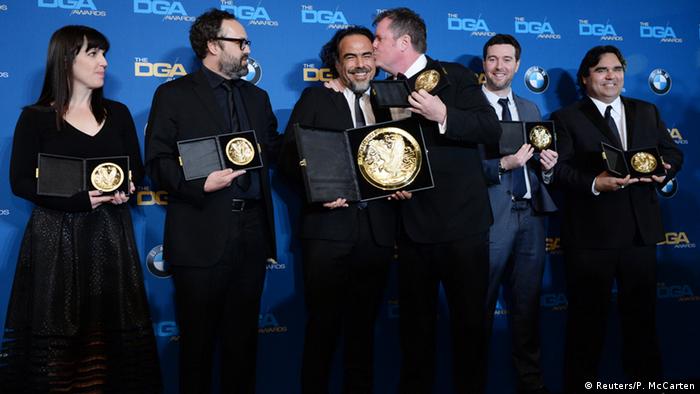 Inarritu (c. in above photo) won the award from the Directors Guild of America (DGA) for his frontier survival drama on Saturday, just three weeks ahead of this year's Academy Awards, more commonly known as the Oscars.

The Mexican filmmaker also won the DGA directing award last year, for “Birdman,” and it turned out to be a prelude to an Oscar. Other winners of the DGA award have also often gone on to take the Oscar, and Inarritu is undoubtedly hoping history will repeat itself this year.

In accepting the award, he thanked the Guild for what he saw as a gesture of acceptance and affection.

"This hug, this embrace you are giving me today goes to a small country, to a whole Latin American community in this country," he said. "Your embrace makes me feel proud."

All but Scott are up for Academy Awards for directing. "Room" director Lenny Abrahamson replaced Scott in the Oscar race. 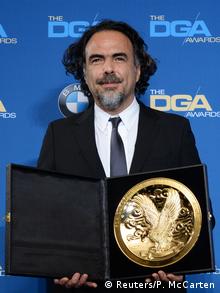 It was Inarritu's second consecutive win

So far this year, industry awards have gone to three different candidates, with the Screen Actors Guild choosing "Spotlight," the Producers Guild selecting "The Big Short" and now the DGA award.

"Spotlight" is a journalism drama about the "Boston Globe's" investigative reporting of Catholic church sex abuse, while "The Big Short" deals with investment chicanery on Wall Street.

The Academy Awards will be handed out on February 28 in a televised extravaganza that will be broadcast around the world.

But this year's awards drama has been overshadowed by the absence of black actors in any of the prominent categories, prompting calls for a boycott.

The Academy moved swiftly to try and tamp down the firestorm in January by announcing a series of changes to membership rules, which are intended to bring greater diversity to the nominating process. But accusations of racial bias continue to cast a pall over the ongoing awards season.

The DGA wasn't exactly a picture of diversity either, with nine of 11 directing awards going to white men.

In addition to film directors, the DGA also handed out television honors. Chris Addison won the award for best TV comedy direction for "Veep," while David Nutter won the award for a TV drama series for "Game of Thrones."

Hollywood awards season kicks off on Sunday with the Golden Globe Awards in Los Angeles, an event second only to the Oscars in terms of importance. British comedian Ricky Gervais is back for the fourth time as host. (28.12.2015)

Black comedy-drama Birdman has scooped the big prize of the night at this year's Oscars. The film won Best Picture as well as Best Director for Alejandro Gonzalez Inarritu. (23.02.2015)