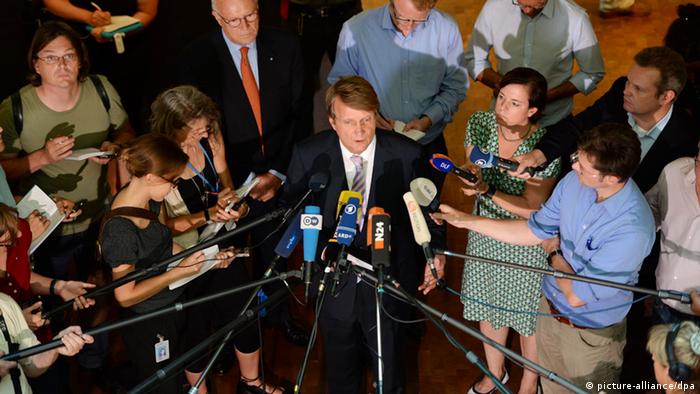 Chancellory Chief of Staff Ronald Pofalla appeared before a three-hour-long hearing of a closed-door parliamentary intelligence committee in Berlin on Thursday. He said that the NSA told Germany it does not track phone and internet records of Germans "by the million."

The German government has come under fire for how much it knew about the broad US spying programs, revealed by whistleblower Edward Snowden. His revelations, including a system of bulk phone data collection and an internet monitoring program called PRISM, have sparked a debate in Germany over the extent to which the US is spying on German citizens.

One in particular, revealed by the news magazine "Der Spiegel," referred to German services working closely with the NSA and using an internet spying tool called XKeyscore. Merkel and her conservative government have said they only found out about PRISM through the media and have played down German-US spying collaboration, despite the existence of XKeyscore.

Pofalla, who is in charge of Germany's intelligence services, relayed the NSA's message to the panel that mass-scale spying did not take place, but declined to provide more details. He added that all allegations of wrongdoing on the part of the US and Germany had been disproven.

"The German [foreign intelligence agency] operates in accordance with law and order," said Pofalla after the hearing. "[It] complies with data protection 100 percent."

The committee's chairman, opposition Social Democrats (SPD) parliamentarian Thomas Oppermann, however, argued that nothing had been achieved on Thursday. "We've made no progress whatsoever," he said, adding that either the government is not being forthright or "the left hand does not know what the right hand is doing."

Oppermann has called for another special session of the committee later this summer.

US connected to Euro Hawk scandal

Also on Thursday, the Ministry of Defense confirmed to a separate special parliamentary committee in Berlin that the development of the Euro Hawk drone project included contracts with the NSA and US Air Force.

The expensive Euro Hawk project, estimated to have cost some 668 million euros ($822 million), became a controversial issue for Chancellor Angela Merkel following its cancelation. The opposition has jumped on the issue ahead of Germany's September 22 elections, demanding that Defense Minister Thomas de Maiziere resign. Those sentiments were renewed following Thursday's news.

"It is no longer in his own hands whether he resigns or stays," said the SPD's defense expert Rainer Arnold. "That is in the chancellor's hands."

"It's only about the SPD's election campaign and not about an explanation," he said.

De Maiziere is expected to appear before the special committee next Wednesday.

WHO: Poorer nations to get first 40 million vaccines next month 2h ago

US to review Afghan peace deal with Taliban 2h ago