German Chancellor Angela Merkel's center-right coalition parties have suffered huge losses in elections in North Rhine-Westphalia, robbing her government of a majority in the upper house of parliament. 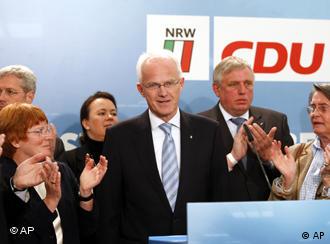 Results from Sunday's poll show Merkel's Christian Democratic Union (CDU) won 34.6 percent of the vote, down a full 10 percentage points from the last election in 2005 and their worst showing ever in the state. The center-left Social Democrats (SPD) were only marginally behind, winning 34.5 percent of the vote.

The business-friendly Free Democrats, the CDU's current coalition partner in North Rhine-Westphalia and at the national level, gained half a percentage point, winning 6.7 percent of the vote. The environmentalist Greens did the best, almost doubling their showing from the last state election, securing 12.1 percent. The Left Party won 5.6 percent, and is now poised to enter the NRW state parliament for the first time.

The election outcome means that the opposition Social Democrats and the Green party could narrowly form a governing coalition in Germany's most populous state with a slim one-vote majority, but would likely require support from the Left Party.

The NRW state election was the first litmus test for Chancellor Merkel's six-month-old CDU-FDP government. The loss in North Rhine-Westphalia has cost her government its majority in the Bundesrat, the upper house of parliament, which represents the 16 federal states.

The debacle in NRW will make it considerably harder for Merkel to push through parliament key reforms and tax cuts needed to revitalize Europe's largest economy.

The election comes just days after the German Bundestag approved a 22.4-billion-euro ($28.6 billion) emergency bailout for debt-stricken Greece, a move that has proved deeply unpopular with voters.

"This is a bitter defeat for the CDU in the state and federally," Gerd Langguth, political scientist at Bonn University, told the Reuters news agency. "It is also an object lesson for the performance of the federal government, especially for the FDP," he added.

"The Greek aid package also had an effect. People aren't happy about Germany being Europe's paymaster," he said.

Results that can't be ignored

SPD and Green leaders took the election results as a sign of bigger changes to come in the country's political landscape. 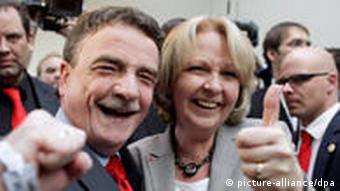 Kraft celebrates with other SPD members

"The SPD is back!" Social Democrat candidate Hannelore Kraft told supporters as the first results came in. "An SPD-Green alliance is what North Rhine-Westphalia wants!"

The co-chair of the Greens, Claudia Roth, said the vote was the payback for the government's decisions in Berlin. "For the federal CDU-FDP coalition, my friends, this is the beginning of the end," she said.

A leading member of the CDU, Wolfgang Bosbach, also said the loss for the conservatives was a sign of bigger issues. "I can only warn the CDU against trying to put a positive spin on this result," he said. "It is a huge disappointment."

According to German Foreign Minister Guido Westerwelle, who also leads the FDP, the coalition government won't ignore these results, describing them as a "warning shot" by voters. "Citizens need to know that we have heard their message," he said. "We must redouble our efforts to win back the lost confidence in our work."