Chancellor Angela Merkel has welcomed Italy's new Prime Minister Matteo Renzi on his first official visit to Berlin. Both were joined by ministers for the talks, which included a discussion on Italian debt. 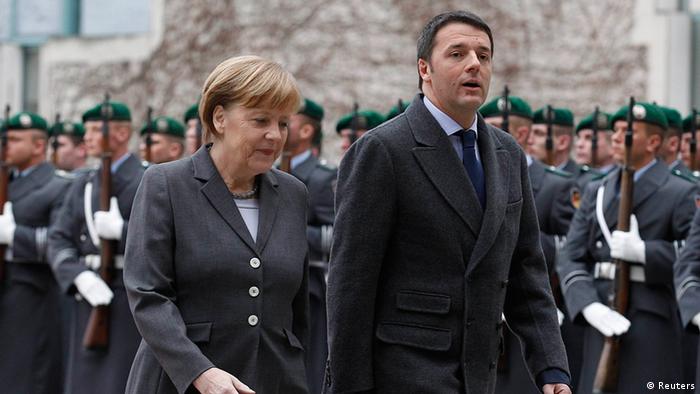 Renzi, who was until recently the Mayor of Florence, outlined his ambitious economic reform plan for Italy.

Those proposals have caused some worry, with Italy's budget deficit expected to rise as a result of the ideas. Renzi, who said ahead of the trip he would not be lectured by Berlin, has proposed a 10-billion-euro ($13.9-billion) tax cut for low-paid workers and a 2.4-billion-euro reduction in corporate taxes.

While Renzi - who took office three week ago - has admitted the deficit might rise, he has said it will be kept within the 3 percent limit of Gross Domestic Product (GDP) demanded by EU austerity regulations.

"These reforms have to be implemented as soon as possible, and we are grateful to Chancellor Merkel for supporting our efforts," said Renzi at a press conference to wrap up the talks.

The Italian prime minister has said the program will be financed through cuts in public spending, although Rome might raise its own debt target from 2.6 percent to closer to three percent.

"We are very impressed with Italy," said Merkel. "[Renzi] has outlined his plans in precise detail. Italy's willingness for structural change is a message we welcome with open arms."

"For me it is also clear that Italy is adhering to the Stability and Growth Pact, with both of its components: growth and employment, and on the other hand stability and a recognition of the fiscal compact."

A gift from Florence

There was a moment of light relief during the visit on Monday, when Renzi presented Merkel with a signed shirt from Mario Gomez, the Germany striker who now plays for Renzi's home town team, Fiorentina.

The Italian premier traveled to Berlin two days after meeting French President Francois Hollande in Paris. He is also set to attend this Friday's EU summit in Brussels.

Joining Renzi are several Italian ministers, including Foreign Minister Federica Mogherini, with both governments taking part in a consultation session.

The visit was chance for German Foreign Minister Frank-Walter Steinmeier to meet with his counterpart Mogherini, to discuss the work of the German-Italian Historical Commission set up to discuss Italian soldiers deported to Germany towards the end of the Second World War.

Germany was also to be represented at the ministerial level in finance, economy, defense, work and transport.