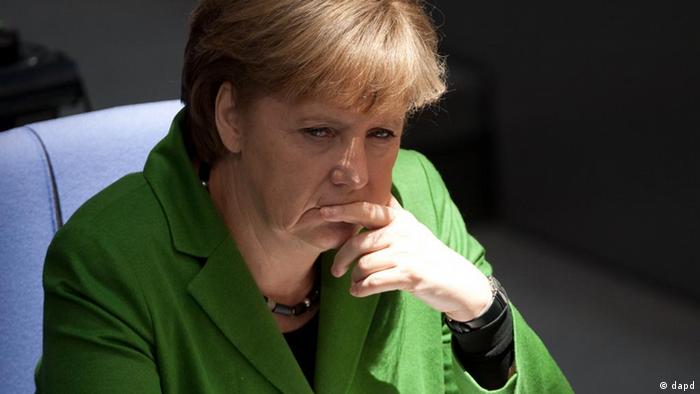 There is a growing debate among German politicians about whether they should boycott Euro 2012 soccer games played in Ukraine.

The news website Spiegel Online reports that if former Ukrainian Prime Minister Yulia Tymoshenko isn't released from jail by the time the tournament starts, Chancellor Angela Merkel is planning to advise ministers in her cabinet to refrain from attending any games played in the country. An exception would be made for Interior Minister Hans-Peter Friedrich, whose portfolio includes sports.

Friedrich has said last week that he intended to attend Germany's Group B game against the Netherlands, which is to be played in Kharkiv, where Tymoshenko is serving a seven-year sentence for abuse of power. However Friedrich said he would only attend the game if he was allowed to first visit Tymoshenko, who was forcibly taken from jail and moved to a hospital last weekend.

Daughter appeals to Germany for help

The 51-year-old Tymoshenko, who had long been complaining of acute back pain, claims to have been beaten by wardens during her removal from the jail and began a hunger strike on April 20. Photos released to the press appear to show bruising.

In an interview with the Sunday paper Frankfurter Allgemeine Sonntagszeitung, her daughter Yevhenia described her mother's condition as "very weak." She also appealed to Germany for help.

"Save my mother's life before it is too late," she said.

The chairman of the opposition Social Democrats has called on all German politicians to stay away from Euro 2012 games in Ukraine. Sigmar Gabriel told the Bild am Sonntag newspaper that as long as people were being incarcerated on political grounds, there could be no business as usual with Ukraine.

"Under these circumstances the EU association treaty (with Ukraine) cannot be ratified," Gabriel said.

Tymoshenko is also facing a second trial on tax evasion charges, but on Saturday, the presiding judge postponed it until May 21.

The Federal Press Office in Berlin declined to comment on the Spiegel Online report, but on Friday a government spokesman said Chancellor Merkel, who has often attended German national team games in the past, had not yet decided whether she would travel to Ukraine during the tournament. Steffen Seibert said the decision would depend, at least in part, on how what happened to Tymoshenko.

Berlin's Charite hospital has offered to treat Tymoshenko, but Ukraine authorities have so far refused all calls for her to be allowed to leave the country to receive medical care.

The tournament, which kicks off in six week's time, is being co-hosted by Poland and Ukraine. Germany plays all of its group-stage games in Ukraine. The country is also hosting a number of games in the knock-out phase, including the final, which is scheduled for July 1 at Kyiv's Olympic Stadium.