German Chancellor Angela Merkel has urged Serbia and Kosovo to reach a deal on border controls and administration issues. On a visit to Kosovo, she warned Serbia that no deal meant no chance of joining the EU. 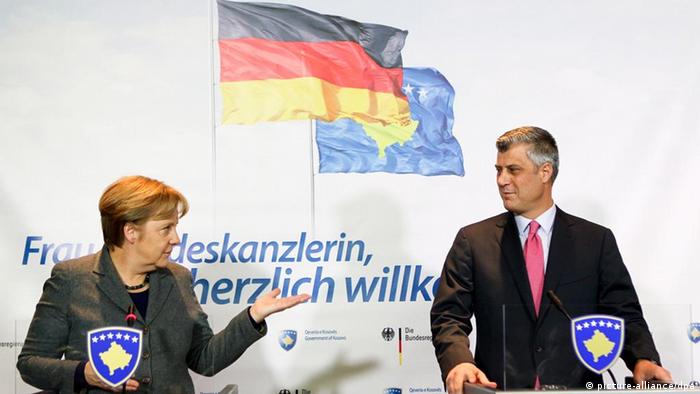 Over to you: Merkel sets tough conditions for EU accession

German Chancellor Angela Merkel did not mince her words during a snap visit to Kosovo on Monday, telling Serbia again that it must reach a peace deal with Kosovo if its bid to join the EU is to have any chance of being successful.

"We made it clear in direct talks with Serbia what we want, the need to come to a regulation of the traffic of goods, which is currently not possible because of the barricades," Merkel said during a brief meeting with Kosovan leader Hasim Thaci.

Merkel also insisted again that Serbia's parallel structures in Kosovo, such as courts, local councils and schools, must be abolished.

But she also stressed that Kosovo, which also seeks EU accession, should not "stir up tensions" and "act responsibly."

Kosovo Serbs, who are opposed to Kosovo's independence, have been blocking roads in northern Kosovo, near the border with Serbia, to prevent the authorities there from taking control.

Two weeks ago, the EU put off a decision on whether to grant Serbia candidacy status until March. Germany, in particular, insisted that Belgrade sort out its relations with Kosovo first. 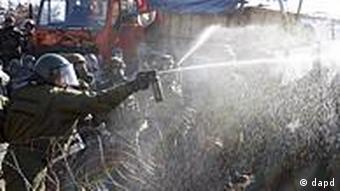 Kosovo declared its independence in February 2008. Since then, it has been recognized by more than 80 countries, including 22 EU members and the US. Serbia, however, still regards it as part of its territory.

Merkel also stopped over for a brief visit to the NATO-led KFOR mission in Pristina, to thank the German troops for their work "from the bottom of her heart." She said she was speaking "for many people in Germany, who should always remember that our security and our peace back home are down to troops serving their country here."

Merkel also thanked German police in Kosovo, the experts of the EU's Rule of Law Mission in Kosovo (EULEX) and the troops' families.

"We have a lot of respect for those who support you from Germany," she said.

The German armed forces, the Bundeswehr, have had a presence in Kosovo since June 1999 and currently contribute 1,300 troops to KFOR.

Serbian President Boris Tadic on Saturday confirmed that a deal has been struck to defuse a Kosovo border dispute. Belgrade had been under intense pressure ahead of a summit to give Serbia official EU candidate status. (03.12.2011)

Just days before EU leaders are to decide whether to grant Serbia EU candidate status, violence continues to flare in northern Kosovo. Public support in Serbia for its EU bid also appears to be waning. (29.11.2011)

Tension near the border between Serbia and northern Kosovo is high. Serb protesters have used small firearms to injure two German NATO peacekeepers attempting to remove roadblocks to the border. (28.11.2011)