Merkel downplays tax row with Switzerland | Germany | News and in-depth reporting from Berlin and beyond | DW | 03.04.2012

Tax disputes between Germany and Switzerland are nothing new. Germans who invest in Swiss banks in order to evade taxes have long been a source of contention. A solution seemed near until recently. 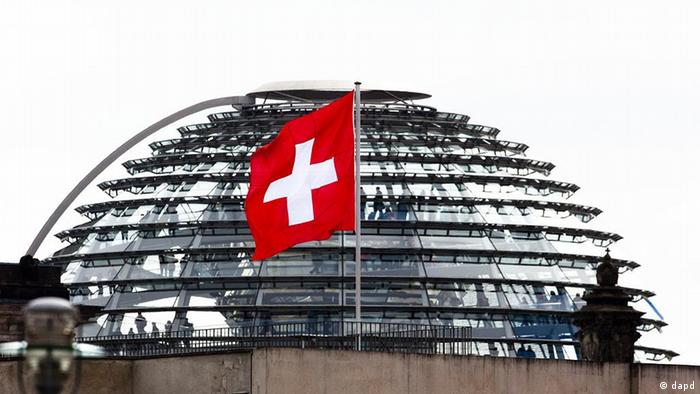 The affair began when the German state of North-Rhine Westphalia's government purchased a CD from insiders containing data on suspected tax evaders in Germany. Allegedly, the wealthy individuals involved were able to evade tax laws by investing their money in Switzerland.

While German authorities worked to prove that the suspects had violated criminal and tax laws, Switzerland insisted on its policy of bank secrecy. Since then, the two countries have gotten close to an agreement that would come into force in 2013 and regulate such incidents in the future.

But that contract could now be in jeopardy after Swiss authorities issued an arrest warrant for three tax investigators from North-Rhine Westphalia, charging them with violating bank secrecy laws and abetting economic espionage. 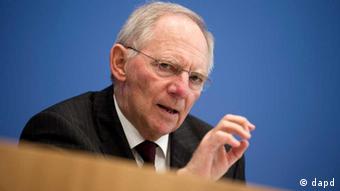 The Finance Ministry under Wolfgang Schäuble has led treaty negotiations

A spokesperson from the German Justice Department said on Monday that Switzerland requested legal aid from Germany on March 20 relating to the case. The federal government is now examining Switzerland's request.

If it goes into effect at the beginning of next year, Germans earning money from Swiss investments will be taxed on those revenues at the same rates they would be in Germany.

It is not known exactly how much money is being held in Switzerland in violation of German laws. Estimates range from 130 to 180 billion euros ($173 to 240 billion). The now endangered tax treaty would require money illegally lodged by Germans in Swiss banks to be retroactively taxed at rates between 19 and 34 percent.

Future returns on Swiss investments would be taxed at a flat rate of 26 percent. The treaty requires approval from both houses of Germany's parliament.

No support from opposition parties 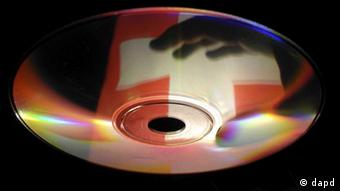 In spite of all this, German governmant spokesman Steffen Seibert said Chancellor Angela Merkel does not see German-Swiss relations as burdened. Seibert added that Berlin strongly believes tax evaders must be pursued. However, he would not say whether the government will continue to support moves like buying CDs with data on suspects.

"Anyone who deceives society about paying his share is violating the law," Walter-Borjans told the daily Berliner Zeitung.

German parties have had varied responses to the tax row with Switzerland. The Social Democrats (SPD) and the Green Party, both opposition parties, do not want to back a treaty that they view as protecting tax evaders. To get through Germany's upper house of parliament, the Bundesrat, the treaty needs the support of German states governed by the SPD.

Jürgen Trittin, the SPD's party leader, called it a scandal "that Switzerland is turning tax investigators into criminals." 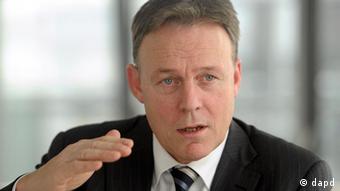 Thomas Oppermann, the SPD's speaker in the lower house of parliament, the Bundestag, has proposed awarding the tax investigators in North-Rhine Westphalia the Federal Cross of Merit.

"The federal government must protect tax investigators and work to stop the Swiss arrest warrant," he told the mass-circulation daily Bild.

CDU General Secretary Hermann Gröhe called Oppermann's proposal "hypocritical," arguing that without a tax treaty, Germany would miss out on billions of euros in taxes.

"That would protect the tax evaders," the CDU politician said.

Germany and Switzerland's dispute over tax law is escalating just weeks before May 13 state election in North-Rhine Westphalia. Polls put a coalition between the SPD and the Green Party in the lead.

A victory in the influential German state, where a fifth of the country's entire population of around 82 million lives, could prevent the federal government from getting the solution to the tax row that it wants.

German-Swiss tax evasion deal on the verge of collapse

A bilateral agreement with Switzerland, expected to fill German state coffers with billions of euros, is threatening to founder at the last minute. Surprisingly, those who stand to profit most have vowed to block it. (30.03.2012)

The United States has indicted Wegelin, Switzerland's oldest private bank, for allegedly helping wealthy Americans to evade taxes. Funds were seized from a partner bank, with charges of fraud and conspiracy. (03.02.2012)