Merkel Calls on Brazil to Make Biofuel Production Sustainable | Germany| News and in-depth reporting from Berlin and beyond | DW | 14.05.2008

German Chancellor Angela Merkel called for rainforest protection in Brazil as well as cooperation with the country on biofuels during the first day of her first Latin America tour. 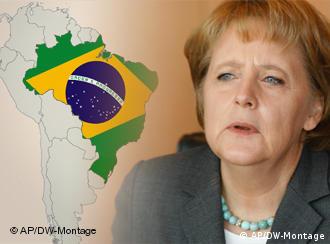 "Biofuels are a way to replace classic fossil-based energy sources, but only when they are grown sustainably," Merkel said Wednesday at the beginning of her week-long trip through Latin America.

Merkel held a press conference in Brazil's capital of Brasilia and emphasized the need to ensure rain forests are protected during the production of biofuel.

An agreement for cooperation on renewable energy is at the center of Merkel's trip to Brazil, but the Roman Catholic Church and some environmental organizations have criticized the deal because they say it lacks enough emphasis on sugar cane plantation workers and the protection of the rainforest.

Brazil is the world's leading producer of ethanol, a biofuel which can be made from sugar cane, corn and other crops. 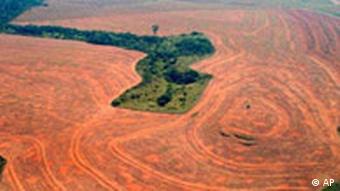 Last month, the European Union said Brazil would have to meet environmental standards if it hopes to export biofuel to Europe.

Environmentalists say that sugar cane production has put pressure on soy production and ranching, pushing them into areas which had previously been rain forest.

Brazil has said that it will contest any EU attempt to place limits on its biofuel exports due to environmental concerns.

When asked about the comments Wednesday, Merkel said only that she wanted to "tighten the strategic partnership with Latin America."

Merkel and Chavez will likely meet Friday at the EU-Latin America summit in Lima, Peru. The summit will include representatives from 27 European countries and 33 Latin American and Caribbean countries.

Europe is the greatest investor in Latin America, its second most important trading partner and the main donor of development aid.

Germany's foreign minister called for a "partnership on eye level" with Latin America, ahead of Chancellor Merkel's visit to the continent whose economic growth continues to raise its political significance. (12.05.2008)

Chavez Hits Out at Merkel Ahead of EU-Latin America Summit

French President Nicolas Sarkozy praised Germany's Chancellor Angela Merkel as she received the prestigious Charlemagne Prize for European leadership. He said she had taught him patience. (01.05.2008)