Merkel Calls for Creative Action and Free Markets at Davos | Germany | News and in-depth reporting from Berlin and beyond | DW | 25.01.2006

Merkel Calls for Creative Action and Free Markets at Davos

German Chancellor Angela Merkel argued Wednesday for a loosening of the shackles that hinder economic restructuring, saying innovation was the key to bolstering European growth. 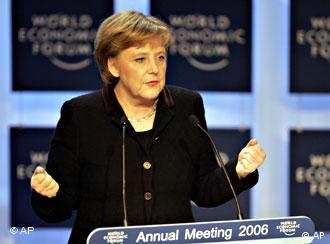 In a speech at the World Economic Forum in Davos, Switzerland, Merkel said political leaders had to allow business chiefs a freer hand, "more leeway," to develop in an unforgiving world market.

"We must believe that our country can live better from its ideas," she said in remarks which reprised many of the themes she used in her successful drive toward the chancellery last year.

Faced with an increasingly competitive world, she added, "we have no choice but this urgency to change."

Merkel was the keynote speaker at the first day of the annual gathering of business and political leaders in the Swiss ski resort of Davos.

Executives were keen to hear her strategy of how to lead Germany out of its economic malaise, crippled by low growth -- 1.5 percent is predicted for this year -- and unemployment that in December stood at more than 11 percent. 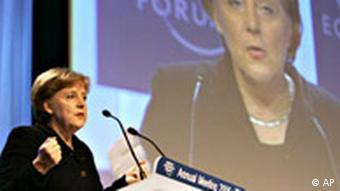 "We have no choice but this urgency to change."

"We are as if paralyzed by events, and do not seem to be able to overcome them," she said in her half-hour speech.

"Something has to be done. We as the biggest economy in Europe must assume our responsibilities in Europe. We have to do it in our own particular way."

It meant sweeping reforms on tax and the budgetary system, reducing labour costs, revamping Germany's federal structure "in order to improve and expedite decision-making" and creating

Citing "terrifyingly high unemployment" across Europe, she added: "We have to make sure the political world intervenes at the right points and withdraws when it's appropriate."

Bureaucracy often stifled innovation, she said. "We must get away from the idea that a directive is for all time."

Merkel pledged that Germany would do all it could to push stuttering talks on liberalising trade.

Negotiators failed to make substantial progress at World Trade Organisation talks last month in Hong Kong amid persistent rifts over the scope and pace of liberalization in the agriculture,

"We saw what happened in Hong Kong," Merkel went on. "We must continue our efforts so that that does not happen again. We will do what we can so that the WTO becomes a major guarantor of international agreements."

German Chancellor Angela Merkel will give the opening speech, on the topic of European integration, at the World Economic Forum in Davos Wednesday. (Jan. 25, 2006)

German Chancellor Angela Merkel has been in office but two months and she's already outrun her predecessors in the popularity stakes. Klaus Dahmann believes that could have something to do with her foreign policy. (Jan. 23, 2006)