Merkel Backs FM Under Fire Over Ex-Guantanamo Inmate | Germany | News and in-depth reporting from Berlin and beyond | DW | 22.01.2007

Chancellor Angela Merkel has said she has full trust in Foreign Minister Frank-Walter Steinmeier, who is under pressure over allegations he helped block the release of a German-born Turk detained at Guantanamo. 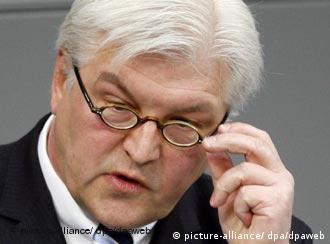 Foreign Minister Steinmeier is under fire, although he has Merkel's support for now

Although the pressure has been growing on Foreign Minister Frank-Walter Steinmeier to answer allegations that he signed off on a plan to block the release of a German-born Turkish man from the Guantanamo prison, Chancellor Angela Merkel has full confidence in him, according to a government spokesman.

"The chancellor has a very close relationship with the foreign minister, which is based on trust," said government spokesman Thomas Steg at a Monday press conference. "(She) goes on the assumption that the two will continue their successful work together."

Steinmeier is being asked to explain his role in the prolonged detention of Murat Kurnaz in the US military prison in Cuba. Kurnaz spent four-and-a-half years in there after his arrest as a suspected al Qaeda supporter in Pakistan, shortly after the Sept.11, 2001 attacks on the United States.

Secret government documents circulating in the German media claim the US offered to release him in 2002 after concluding that he was not a terrorist, but that Germany refused to take him back.

The newspaper Süddeutsche Zeitung claimed Steinmeier was actively involved in his role as coordinator of the country's intelligence services under the then government of Chancellor Gerhard Schröder.

Kurnaz was not freed until August 2006 on the intervention of the present government led by Chancellor Angela Merkel.

Last week he appeared before a parliamentary panel investigating whether the country's foreign intelligence service BND breached German regulations while assisting US anti-terrorism operations after Sept.11. 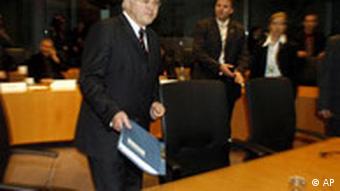 Steinmeier was questioned in front of the investigative committee in December

Steinmeier is scheduled to appear before the committee after Kurnaz gives evidence again on Feb. 1 and the agents who interrogated him at Guantanamo are also questioned.

Both Steg and foreign ministry spokesman Jens Plötner said that the government could not comment on the allegations in detail because some of the documents involved are classified. Plötner said, however, that Steinmeier was eager for the investigative committee to conclude its questioning of preliminary witnesses so that he would be able to "clear up the matter quickly."

Kurt Beck, the chairman of Steinmeier's own Social Democratic Party (SPD), also came to the minister's defense on Sunday.

"I'm certain that when he addresses the panel he will be able to demonstrate that he acted without reproach," he said.

The bearded Kurnaz, 24, described how he was subjected to physical and psychological abuse by his US captors that included being sprayed with "knock-out" gas and chained up for 12 hours a day. 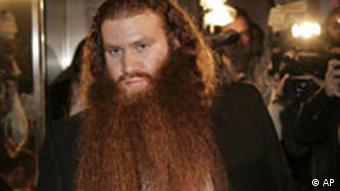 Kurnaz's account of the indignities he suffered during his time in Guantanamo "got under my skin," said Max Stadler, an opposition Free Democrat member of the parliamentary committee. "It makes you really angry to learn that an innocent man was forced to spend five years in such conditions."

Kurnaz also told the panel that he was interrogated on two occasions by German intelligence agents, who also concluded he was not a terrorist, the Süddeutsche Zeitung report said.

Despite this evidence, German authorities actively blocked his release, the report said, quoting official documents which showed the interior ministry drew up a five-point plan to prevent his return.

The documents obtained by the Süddeutsche Zeitung also suggested the intelligence services ask the Americans to hand over Kurnaz's Turkish passport to a German embassy so a page with his residence permit could be removed, leaving him without any chance of returning to the country.

Other media reports claimed the US attached conditions to Kurnaz's release, including one that he be placed under round-the-clock surveillance to make sure he did not engage in terrorism.

"They were reluctant to be saddled with someone who didn't have German passport but a Turkish one and who was so dangerous in the Americans' eyes that they felt he needed 24-hour observation," an unnamed member of the SPD involved in the case told the Stuttgarter Nachrichten newspaper.

German Foreign Minister Steinmeier faces uncomfortable questions over his role in the scandal surrounding a German-born former Guantanamo inmate who has alleged he was abused by both German and US soldiers. (20.01.2007)

Former Guantanamo Bay prisoner, German-born Turk Murat Kurnaz told a parliamentary committee he faced torture and other abuse during his four years spent at the US prison in Cuba. (18.01.2007)

German state prosecutors on Monday said they are investigating two special forces soldiers accused of abusing a German-born Turkish man while he was held in Afghanistan in 2002. (08.01.2007)