Merkel at odds with Obama on financial policy | Germany | News and in-depth reporting from Berlin and beyond | DW | 19.06.2010

German Chancellor Angela Merkel on Saturday contradicted US President Barack Obama, saying that Europe will push for a swift exit from fiscal stimulus programs and focus instead on budget cuts at the G20 meeting. 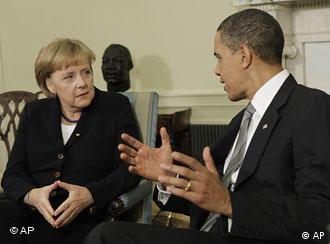 German Chancellor Angela Merkel on Saturday signaled that she expected next week's G20 summit in Canada to focus on budget consolidation rather than continue with stimulus packages to strengthen the global economic recovery as favored by US President Barack Obama.

Leaders of the 20 biggest developed and developing economies meet on June 26-27 in Toronto, Canada.

In her weekly podcast, Merkel said from a European perspective, keeping an eye on avoiding future economic problems takes priority.

"For the European parties involved, and especially Germany, it is urgently necessary to prevent crises like this from ever happening again in the future," she said.

Economic growth must be sustainable, environmentally friendly and oriented towards the future, Merkel said. 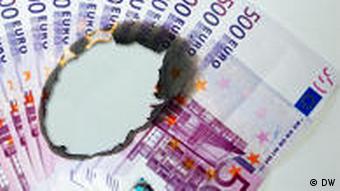 Over the past several months, the European Union has agreed to put together a rescue package worth billions of euros to ease Greece's financial woes, and agreed to another safety-net fund of several hundred billion euros to protect other nations from spiralling out of control like Greece. As Europe's largest economy, Germany has picked up a large part of the tab.

European governments have also been launching austerity measures to head off a spread of the debt crisis begun in Greece.

At odds with Obama

Merkel's stance heading into the G20 summit is contrary to that of President Obama. On Friday, Obama urged caution when it came to scaling back government spending.

"Our highest priority in Toronto must be to safeguard and strengthen the recovery," Obama said in a letter to G20 leaders on June 16.

"We worked exceptionally hard to restore growth; we cannot falter or lose strength now. This means that we should reaffirm our unity of purpose to provide the policy support necessary to keep economic growth strong," he said.

However, Germany - and other members of the European Union - are having to come to each other's aid in a joint effort to protect the euro, shared by 16 of the EU's members. Merkel has said that the billions the German government had already agreed to were in the greater interest of the euro currency, not individual member states.

Merkel also said that the European Union would push again for a global financial transaction tax at the G20 meeting.

Germany and France support the introduction of the tax in Europe but G20 hosts Canada as well as Britain are opposed to it.

"There will certainly be controversial discussions about this but I am happy the European council reached a common stance on this for the G20 meeting," Merkel said.

In an interview with Deutsche Welle, the US ambassador to Germany explains why President Obama and Chancellor Merkel share the same domestic problems and which team has impressed him most at the World Cup. (18.06.2010)

Opinion: G8 and G20 summits in Canada must learn from G8's mistakes

Guest commentator Jennifer Gronau argues that if the G20 is to successfully negotiate the reconstruction of the global financial system, it must first take time to learn from the limitations experienced within the G8. (09.06.2010)

Merkel and Sarkozy present united front after meeting in Berlin

Chancellor Merkel met President Sarkozy in Berlin, where they discussed a joint strategy on Europe's debt crisis. Both leaders agree they want to protect the euro, but in the past they had disagreed on how to do this. (14.06.2010)

Top diplomats from around the world arrive in Bali, Indonesia for the G20 summit, with the Ukraine conflict expected to dominate talks. Global food and energy supplies were also set to feature high on the agenda.