Merkel ally bows out of state leadership contest | Germany | News and in-depth reporting from Berlin and beyond | DW | 19.06.2010

The conservative premier of North Rhine-Westphalia, Juergen Ruettgers, said on Saturday he would not contest a challenge for his position, raising the chances for a Social Democrat-Green minority government. 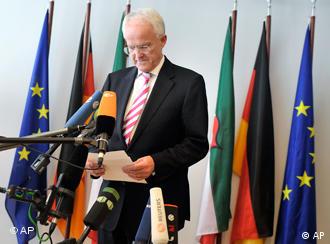 Ruettgers will no longer seek re-election in NRW

Juergen Ruettgers said on Saturday he would not stand against state Social Democratic Party (SPD) leader Hannelore Kraft for election to premier.

The announcement increases the likelihood of a Social Democratic-Green minority government in Germany's largest state, North Rhine-Westphalia. Kraft has been claiming the state premiership ever since the coalition consisting of the conservative Christian Democratic Party (CDU) and the market-friendly FDP party lost control of the state in a regional poll on May 9.

Following the vote, the Social Democrats were initially unable to form a coalition with their preferred partner, the Greens. Weeks of failed negotiations with the CDU, the FDP and the anti-capitalist Left Party followed, and Kraft initially said she would seek to push through an agenda from the opposition while Ruettgers stayed on as caretaker premier.

On Thursday, Kraft surprised many by announcing her intention to govern with a minority government of the SPD and the Greens, leaving Ruettgers and the CDU out of North Rhine-Westphalia's short-term political future.

Media reports say Ruettgers will also relinquish leadership of the chairmanship of the state CDU party, effectively taking a step back from frontline politics.

Ruettgers had led a coalition government of CDU and the Free Democrats since 2005. That coalition reflected the national government of Chancellor Angela Merkel, also a member of the CDU. However, Ruettgers' decision not to pursue re-election at the state level means the balance of power in Germany's Bundesrat, the state-run upper house of parliament, will no longer favor Merkel.

If the Social Democrats in Germany's largest state, North Rhine-Westphalia, go through with the minority coalition they announced on Thursday, it will change the balance of power in Germany. (18.06.2010)

Germany’s two main parties have met in a first round of exploratory talks aimed at solving a political impasse in the country’s most populous state, North Rhine-Westphalia. (27.05.2010)

German Chancellor Angela Merkel's center-right coalition parties have suffered huge losses in elections in North Rhine-Westphalia, robbing her government of a majority in the upper house of parliament. (10.05.2010)