Merkel Addresses Israeli Parliament Amid Controversy | Germany | News and in-depth reporting from Berlin and beyond | DW | 18.03.2008

Chancellor Merkel addressed the Israeli parliament on Tuesday amid controversy - some MPs boycotted the speech while Hamas slammed Merkel for being blind to what it called Israel's "Holocaust" against Palestinians. 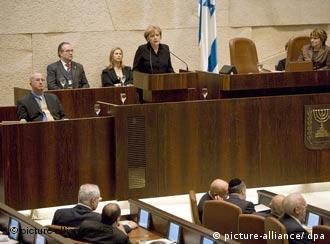 In an emotional speech, Merkel said Germany will be committed to Israel's security

German Chancellor Angela Merkel's three-day solidarity visit to Israel to mark the 60th anniversary of the creation of the Jewish state following the Nazi holocaust climaxed with a historic speech to the Knesset, the Israeli parliament on Tuesday, March 17.

The 53-year-old became the first German head of government to address the Knesset, an honor normally reserved for heads of state.

Merkel told Israel's parliament that Germans are filled with shame over the Nazi Holocaust and that she bows before the victims. In an emotional speech, delivered in German and a smattering of Hebrew, Merkel said her country will always be committed to Israel's security, particularly in light of growing threats from Iran.

"The Shoah fills us Germans with shame," she said, using the Hebrew word for the Holocaust in which 6 million Jews were killed. "I bow to the victims. I bow to all those who helped the survivors."

Mixed feelings about German in the Knesset

But Merkel's speech in German has ruffled some feathers in Israel, where memories of the Nazis' murder of six million Jews during World War II run deep.

Five legislators in the 120-member Knesset stayed away in
protest, saying they did not want to hear German spoken. Others, including at least one Holocaust survivor, criticized the plans as "populist." 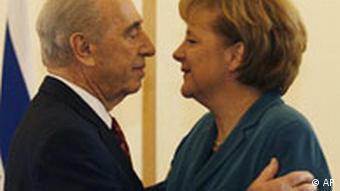 "I know the last sounds heard by my grandparents and my uncles whom I have not known were those of the German language," said Arieh Eldad, an MP of the far-right National Union-National Religious Party.

Israel Radio reported Shelly Yachimovich, of the coalition Labor Party, as saying she would stay absent from the speech because it was "insensitive" toward Holocaust survivors to hold it in German, "the language of their torturers - SS officers, camp commanders and the Gestapo."

"It's very hard to hear the German language in the Knesset. We want to remind (people) that despite the fact that Germany today is indeed showing friendship toward Israel, we remember what had happened," said Yitzhak Levy, of the same party.

But a 73-year-old lawmaker, who is a Holocaust survivor herself, criticized the boycott as "nothing but populism."

"It doesn't bother me at all that Merkel chose to speak in German," said Romanian-born Sara Marom Shalev, of the coalition Pensioners' Party.

Labour Party lawmaker Ophir Pines, also the son of a Holocaust survivor, criticized the boycott as well as an "inappropriate provocation."

The issue of German being spoken inside the Israeli parliament has sparked angry protests before in the Jewish state.

When Johannes Rau became the first German head of state to address the Knesset in 2000, he did so in German and several Israeli MPs stormed out in protest.

His successor Horst Koehler received a warmer reception five years later and included several sentences in Hebrew in his speech.

Israel and Germany established ties in 1965 after years of negotiations, including over reparations for Jewish property seized during the Holocaust. Israel has since come to regard Germany as its strongest ally in Europe.

And on Monday, the two countries further tightened their friendly but loaded relations by signing a bilateral agreement for tighter military, cultural, political and economic cooperation.

The agreement was signed at a symbolic, first ever joint cabinet session in Jerusalem, attended by 17 ministers of both sides, including Merkel and Prime Minister Ehud Olmert.

Merkel's last day of her visit was also marred by strong comments by radical Islamist movement Hamas which slammed Merkel for closing her eyes to what it labeled as Israel's "holocaust" against the Palestinians in the Gaza Strip.

Merkel's comments "reflect a moral degradation into which this chancellor has fallen by supporting without failure an entity that commits massacres against Palestinian children, women and the elderly," Hamas said.

The Islamists also said the chancellor "has closed her eyes to the holocaust that this entity has perpetrated in the Gaza Strip, focusing only on the Holocaust committed by the Nazis against Jews in her country, the extent of which is a subject of doubts and exaggerations." Hamas has pledged itself to Israel's destruction. 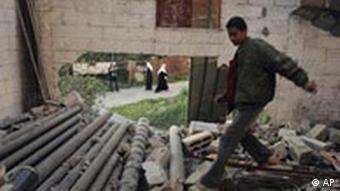 The comments referred to Israeli operations in the territory that began on February 27 in response to rocket fire and that killed more than 130 Palestinians, including several dozen children and other civilians, in the course of a little more than a week. Five Israelis were also killed.

Merkel, who was urged to be critical during her visit to Israel and raise questions about Israel's continued building of Jewish settlements in the West Bank, sidestepped the settlement issue during talks with Prime Minister Ehud Olmert on Monday, saying only the question was complex.

When asked about almost daily rocket fire launched at southern Israel by Palestinian militants in Gaza, she said, "There are conditions that don't make talks any easier."

Germany and Israel strengthened relations on Monday, March 17 with far-reaching agreements during Chancellor Merkel's visit to the country to mark the 60th anniversary of the founding of the Jewish state. (17.03.2008)

Chancellor Angela Merkel arrived in Israel on Sunday, March 16, for a highly symbolic three-day visit that should usher in a new phase in Germany's relations with the Jewish state 60 years after the Holocaust. (16.03.2008)

Germany isn't helping Israel by turning a blind eye to its dealings with Palestine, wrote DW's Bettina Marx in response to the Israeli prime minister's visit to Berlin this week. (13.02.2008)

Do you think it was appropriate for Chancellor Merkel to address the Israeli parliament in German? Please include your name and country in your reply.