Merck does not have to compensate French patients, court rules

A court in France has thrown out a lawsuit against German pharmaceutical company Merck. More than 4,000 patients took the drug manufacturer to court after it changed some of the ingredients in its thyroid medication. 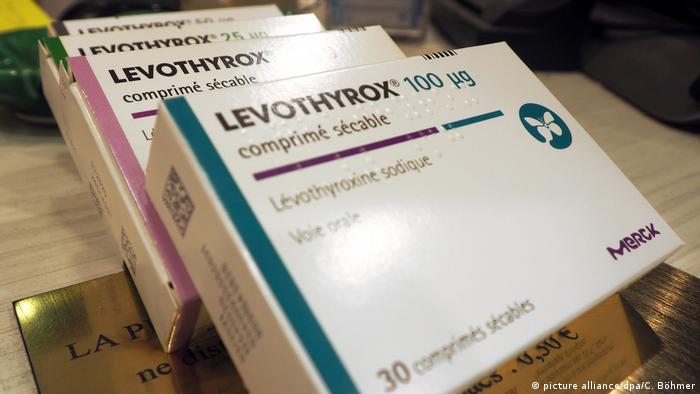 Merck will not have to pay damages to customers who claim they weren't properly informed about changes to the company's thyroid drug, a French court ruled Tuesday.

More than 4,100 plaintiffs had demanded a total of €41 million ($46 million) — or €10,000 each — in compensation. They alleged the German pharmaceutical giant failed to tell them about possible side effects of a new version of its Levothyrox drug released in 2017.

But the court in Lyon rejected the class-action suit, finding that Merck had provided enough information.

About 3 million people use the thyroid medication in France.

Read more: When the thyroid starts acting up

Merck made adjustments to the Levothyrox formula two years ago at the request of French medical authorities, swapping out only inactive ingredients and keeping the active ingredient the same.

The company told the court it had launched a publicity campaign about the drug's new formula targeting doctors and pharmacists around the country.

But the plaintiffs said that wasn't good enough. They argued that individuals in their group — under the mistaken impression they were using the same drug — did not understand why they suddenly began to suffer side effects such as palpitations, memory loss or weight gain.

Read more: Merck and Pfizer to cooperate on anti-cancer immunotherapy

Christophe Leguevaeus, a lawyer for the patients, told Franceinfo they had not yet decided whether to appeal the verdict.

"This is a big disappointment for me and the patients," he said.

The old version of the thyroid drug is sold in Germany under the name Euthyrox. The new formula, Levothyrox, is currently available in France, Switzerland and Turkey, and is expected to go on sale in Germany later in 2019.

Merck, the world's oldest operating pharmaceutical company, is headquartered in the German city of Darmstadt.

Merck buys Sigma-Aldrich in its largest acquisition ever

German pharmaceutical firm Merck has announced a deal to buy US specialty chemicals maker Sigma-Aldrich in a bid to expand its life science business. The acquisition is Merck's biggest ever. (22.09.2014)