Although repeatedly cited for failure to rein in deficit spending, Germany and France are by no means the only violaters of EU deficit guidelines. There are at least 10 guilty members and many more awaiting a verdict. 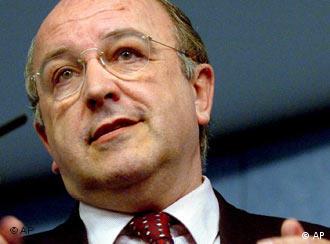 After the Dutch government managed to lower its budgetary deficit from 3.2 percent of gross domestic product (GDP) in 2003 to 2.3 percent in 2004, the EU suspended legal measures against the Netherlands on June 7. At the same time, the EU said it was initiating disciplinary action against Italy for violating the Stability and Growth Pact by exceeding the EU's deficit ceiling.

Italy's public deficit reached 3.1 percent of GDP in both 2003 and 2004, according to Eurostat, the EU's statistics office. Thus, Rome twice overstepped the 3.0 deficit ceiling imposed by the EU. The European Commission hasn't formally declared it will take disciplinary action against Italy, but Monetary Affairs Commissioner Joaquin Almunia made clear that the body would do so by the end of June.

Due to Germany's poor economic climate, the European Commission put on ice disciplinary measures against the country. But it's questionable whether the respite until autumn 2005 will have helped. Even Germany's optimistic finance minister, Hans Eichel, has admitted that sticking to the 3.0 percent limit in 2005 will be difficult. Every year since 2002, Germany has violated the Stability Pact rules. In 2004, the budget deficit reached 3.9 percent, and the commission predicts the 2005 deficit to reach 3.3 percent of GDP. Since Germany is expected to benefit from the reformed (and relaxed) Stability Pact rules, it's likely that it the EU will accord it another year to consolidate its budget.

The commission has also put disciplinary action against France on hold and expects the country's budgetary deficit to fall to 3.0 percent this year. If Paris does indeed achieve that aim, measures against France will most likely be dropped. Like Germany, France has consistently violated the Stability Pact limit since 2002. In 2004, the public deficit stood at 3.7 of GDP.

While the commission has left Germany and France room to breathe, it's taken a hard line against Greece. The Greek authorities embellished their deficit figures from 1997 to 2003 by 2.1 percent on average, circumnavigating the critical 3.0 percent ceiling again and again. Originally estimated at 5.5 percent, Greece's 2004 deficit actually reached 6.1 percent. Intensified monitoring on the part of Brussels and the prospect of penalties amounting to billions of euros have had an effect though. In April, the EU announced it would forgo sanctions against Greece in view of Athens' radical belt-tightening.

More than half of the countries the EU is monitoring for violating the budget ceiling are new members. In 2003, Cyprus, the Czech Republic, Hungary, Malta, Poland and Slovakia had high deficits and have faced the prospect of disciplinary action since joining the EU in May 2004. Although they have all succeeded in dramatically reducing their deficits -- the Czech deficit dropped from 11.7 in 2003 to 3.0 in 2004 -- the EU's spring forecast predicted that they would again breach the ceiling this year. Only Cyprus was expected to adhere to the budget criteria, with a public deficit of 2.9 percent in 2005.

In late June, Portugal is set to boost to 11 the number of countries being monitored for their budgetary sins. The country expects a record deficit of 6.83 percent of GDP this year. At that level, disciplinary action against Lisbon is practically a given.

When France and Germany, chronic violators of EU budget requirements, pushed for a weakening of those rules, they hardly expected to attract IMF attention. (April 15, 2005)

EU foreign ministers are meeting Monday to discuss the future spending of the EU. Despite expectations of reaching a compromise on the issue, positions hardened in the run-up to the talks. (June 13, 2005)

The road into the euro zone for countries in eastern Europe has become smoother after the agreement by EU leaders last week to relax budget rules, ministers and analysts say. (March 28, 2005)