Exit polls suggest that the president of Bolivia will lose a referendum on extending his presidency by another term. The country's vice president says it is still to early to tell the outcome. 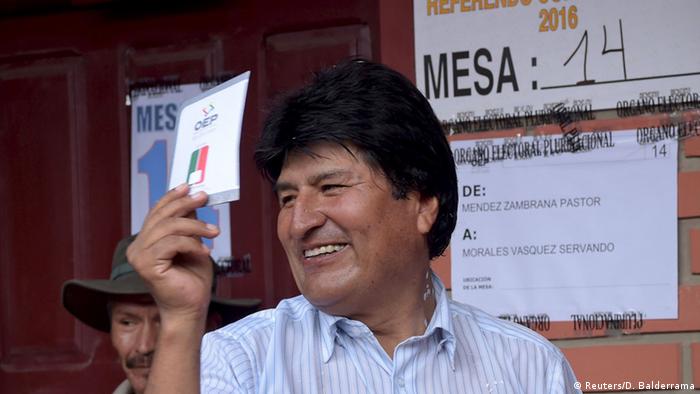 A slight majority of Bolivians rejected Evo Morales' bid to run for another term as president, local media reported, after the long-reigning leader found his reputation clouded by corruption scandals.

The referendum asked whether the constitution should be amended to allow Morales, who has served as president of Bolivia for a decade, to run for a fourth term.

Local media reported that about 52 percent of people voted no - a blow for Morales, who had said he expected around 70 percent to vote yes. 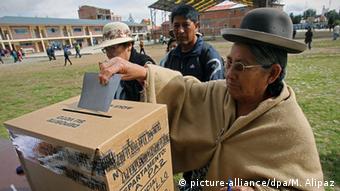 Vice President Alvaro Garcia, who would also benefit from a positive outcome in the referendum, told reporters that it was still too close to call.

"We are facing a very clear technical tie, and it is highly probable that these figures will drastically change" as vote counting continues, Garcia said. He noted that ballots in rural areas where Morales enjoys support were yet to be fully counted, as were votes by Bolivians living abroad.

"So it would be better to hold your enthusiasm and calmly wait for results," Garcia said. "All your celebration may well turn into weeping."

Voting in the referendum got off to a rocky start when enraged citizens set fire to ballot boxes in the city of Santa Cruz after learning they would not be allowed to register. The lack of voting materials in other parts of the country also caused delays.

"My wish is that there be the greatest citizen participation possible and that this day be historic," Morales said after casting his ballot, according to The Associated Press.

Various scandals have plagued Morales' Movement for Socialism, including accusations that he showed favoritism for a Chinese engineering company in the construction of a railroad. It was also later revealed that a former lover of the president was employed by the company.

The 56-year-old is Bolivia's first democratically elected president of indigenous heritage. Since taking office in 2006, he had been re-elected twice, most recently in 2014 to a five-year term that ends in 2020.