Mayan countdown to 'end of the world' postponed

Mystics, hippies and tourists celebrated in Mexico as the world marked the end of the Mayan long count 400 year calendar. Doomsday predictions appear to be unfounded. 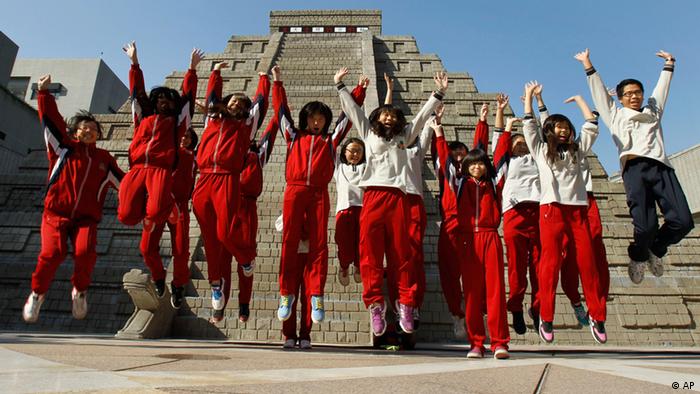 Some, who believed the world would end on Friday had reached the conclusion based on the "Long Count" of the 5,200-year Mayan calendar. The theory was that a doomsday scenario would be set into motion on December 21, 2012, which also coincides with the December solstice.

For the Mayas though, the date marked the end of a period of 400 years, and was expected to bring a regeneration of wisdom and other positive developments.

The end of the Mayan calendar was largely ignored, with most going about business as usual. However, some gathered around archaeological remains of the Maya's ancient culture to mark the event.

Cashing in on the end of the world

Thousands gathered at Chichen Itza and other sites in Mexico, where they were on hand to greet the first sunrise of this new era. Elsewhere, people celebrated the event in bars or restaurants.

Around 3,000 people gathered at the Tikal stone pyramid in northern Guatemala, where native Maya priests lit fires as the sun emerged on Friday morning. Actors in costume also danced to celebrate the event.

In France, meanwhile, journalists from all over the world flocked to the southern village of Bugarach, which had been rumoured to be one of the only places where one could escape doomsday. Apart from members of the media though, few were able to reach Bugarach, as local authorities, fearing that they would be inundated by New Age enthusiasts, had taken the precaution of blocking access roads.

The village had been regarded as a refuge by some who believed the end of the world was imminent. The theory there had been that aliens would use the Pic de Bugarach mountain, which towers above the village, as a landing strip, and then whisk nearby human beings away to safety.