Martin Schulz under fire after Israeli-Palestinian comments in the Knesset | News | DW | 12.02.2014

Martin Schulz under fire after Israeli-Palestinian comments in the Knesset

A speech by European Parliament President Martin Schulz in the Israeli Knesset has sparked an uproar. His remarks about the conditions in the West Bank caused several right-wing politicians to walk out in protest. 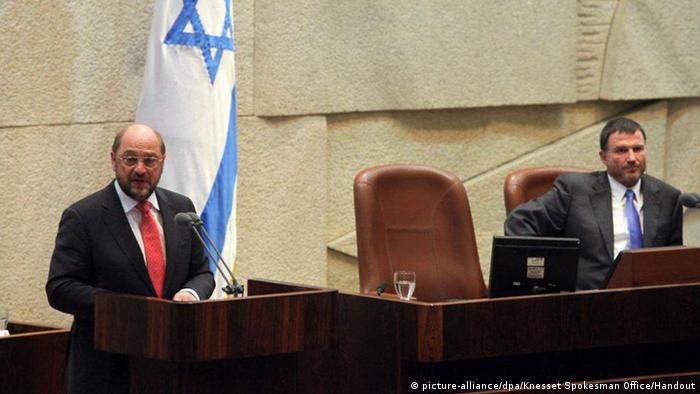 European Parliament President Martin Schulz came under fire Wednesday after making remarks in the Israeli parliament, the Knesset, about the water usage of Palestinians and Israelis in the occupied West Bank.

In his speech, Schulz said that when he was in Ramallah earlier in the week, a young Palestinian had asked him "why an Israeli can use 70 cubic liters of water daily and a Palestinian only 17?" He then added, "I haven't checked the data. I'm asking you if this is correct."

The remarks caused the Knesset to break out in turmoil. Right-wing Jewish Home Party member Moti Yogev shouted at him, "Shame on you, you support someone who incites against Jews." Yogev and Naftali Bennett, Economy Minister and Jewish Home party leader, then left the hall.

Bennett immediately took to his Facebook page: "I will not tolerate duplicitous propaganda against Israel in the Knesset … and especially not in German."

Likud Party member Moshe Feiglin, known for his extreme statements, was absent for the speech because, "it is inappropriate that a speech is given in the parliament of the Jewish state, in the language used when our parents were thrust into the railway wagons and in the crematoria," he wrote on Facebook.

Prime Minister Benjamin Netanyahu, in his own address to the Knesset, accused Schulz of repeating claims without fact-checking. "Check first," he said.

In his speech, Schulz also said “the Palestinians have the right to self-determination and equality," and that they want to "live in peace and have unlimited freedom of movement," which he said they are denied in Gaza.

Shortly before his Knesset speech, Schulz had complained of sensitivity in Israel against criticism from Europe. "Mutual criticism is quite normal in a democracy," he told Israeli journalists. "The EU stands by its special relationship with Israel, but that does not mean that it has to agree with every decision of the Israeli government," stressed Schulz.

Israel has approved plans for 558 new settlement homes in annexed East Jerusalem, the city council has said. The announcement comes as the country is in the midst of peace talks with the Palestinians. (05.02.2014)