The leader of the far-right National Front party has arrived in court to face charges of hate speech. The case is centered around comments she made years ago about Muslim immigrants in France. 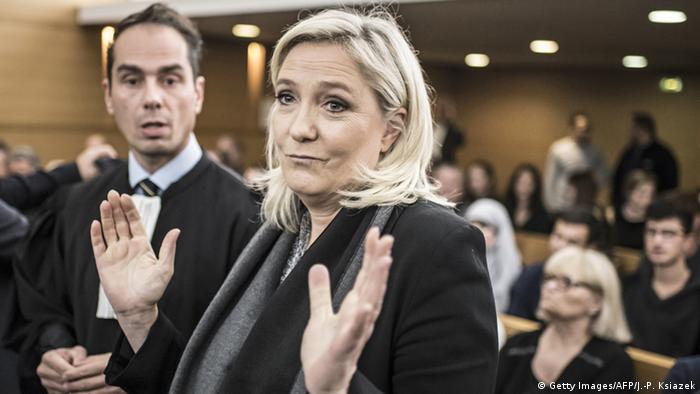 The trial centers around comments she made at a rally in Lyon in 2010 regarding the issue of Muslim men and women praying on French streets.

"I am sorry, but for those who love to talk about World War II, and about the occupation, one could talk about this for once, because it is an occupation of the territory," she told a crowd of supporters.

Le Pen, daughter of National Front founder Jean-Marie Le Pen, has seen her popularity rise over the years, thanks in part to her decision to oust her father from the party following anti-Semitic comments he made.

Many observers feel the trial will have little bearing on her standing among National Front supporters, and might even help her in the long run. Part of her strategy - and the strategy of her party - has been to play the victim of politicial correctness. This was highlighted in a tweet from the trial on Tuesday by National Front member Christophe Boudot, in which he used the hashtag "JeSuisMarine" - a riff on the popular "JeSuisCharlie" solidarity hashtag that emerged after the Charlie Hebdo attacks in January.

The National Front has seen high levels of support ahead of regional elections in December; polls suggest that some candidates could win nearly 40 percent of the vote.

France's far-right National Front (FN) has been handed preliminary charges for the misuse of assets and complicity in fraud. The party is under investigation over the financing of its 2012 election campaign. (09.09.2015)