Manny Pacquiao dropped by Nike after comments against homosexuals

The sporting goods giant has cut ties with the boxing superstar after he made remarks against homosexual couples. Manny Pacquiao has apologized for what he said during a TV interview in the Philippines. 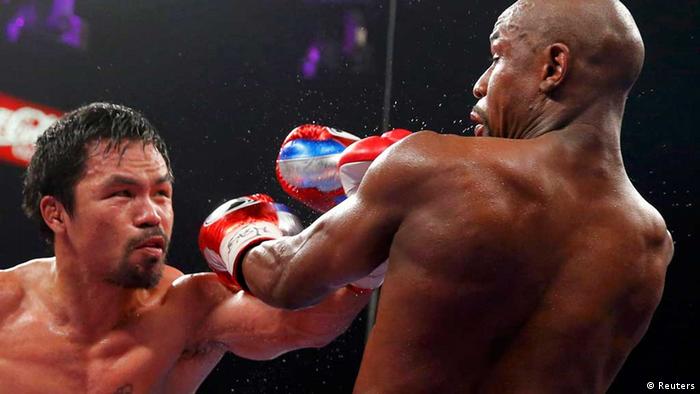 Barely one day after suggesting homosexual couples were "worse than animals" during a TV interview, Nike has ended their relationship with world famous boxer Manny Pacquiao.

"We find Manny Pacquiao's comments abhorrent," Nike's statement read. "Nike strongly opposes discrimination of any kind and has a long history of supporting and standing up for the rights of the LGBT community. We no longer have a relationship with Manny Pacquiao."

Manny Pacquiao made the comments on a TV station in his home country of the Philippines. The eight-time boxing world champion is a devout Christian, and initially defended his comments on Instagram before making a Facebook post asking for forgiveness from "those I've hurt."

"I'm sorry for hurting people by comparing homosexuals to animals. Please forgive me for those I've hurt. I still stand on my belief that I'm against same-sex marriage because of what the Bible says, but I'm not condemning LGBT. I love you all with the love of the Lord. God bess you all and I'm praying for you," said Pacquiao on his Facebook page, along with a video of his apology.

In the Philippines, where Pacquiao has served as a member of the House of Representatives since 2010, outlaws gay marriage. And it is not likely that this law will be changed due to the overwhelming support of the Catholic Church in the country, which does not support gay marriage.

Zambia's Catherine Phiri has pulled off a surprise win in the World Boxing Council championship. She dethroned reigning champ, Yazmin Rivas of Mexico. It's her crowning achievement in what's been a remarkable career. (03.02.2016)

After beating Manny Pacquiao in the fight billed as 'The Fight of the Century', Floyd Mayweather has lost his WBO title. For all the talk and performance from the US boxer, he is now without the coveted title. (07.07.2015)

Floyd Mayweather has branded Manny Pacquiao a "sore loser" and a coward, announcing he won't delay his planned retirement to grant the Filipino icon a rematch next year. Mayweather has been undefeated for 48 matches. (08.05.2015)

US boxer Floyd Mayweather has won his welterweight boxing bout against Filipino rival Manny Pacquiao. The eagerly anticipated fight, tagged as the most lucrative match in history, had taken five years to set up. (03.05.2015)

Analysts say Pacquiao has a fair chance of winning, due to his home region and celebrity status. However, other members of the electorate would prefer a candidate with more political experience.

The former boxer and now senator has promised to tackle corruption and poverty. Despite his popularity, the nomination garnered a lukewarm reaction due to his past controversies and lack of political experience.

Annalena Baerbock was telling a story about a pupil refusing to complete an assignment containing the racial slur. Meanwhile, Armin Laschet has once again apologized for laughing while visiting a flood-stricken town.