A "hungry" artist caused a stir at an art show after he ate a piece by Italian artist Maurizio Cattelan in front of an astonished crowd. The gallery, however, has said the artwork was not destroyed. 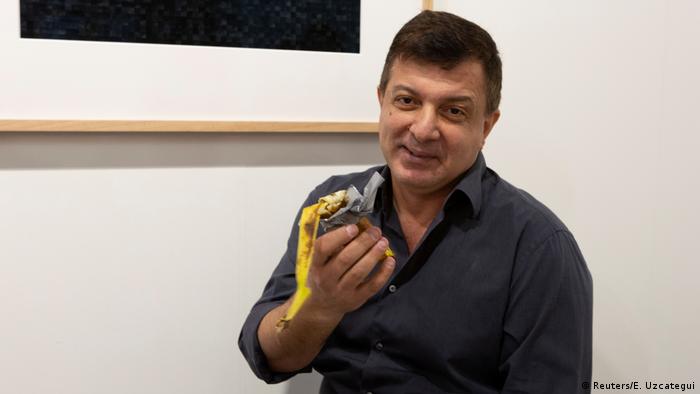 A performance artist at the Art Basel show in Florida's Miami Beach shocked a crowd of onlookers when he ate one of the most appealing pieces at the show on Saturday.

But he didn't require medical attention afterwards, as the artwork was an ordinary banana that had been duct-taped to the wall. "Comedian," a piece by Italian artist Maurizio Cattelan, had already been sold to a French collector for $120,000 (€105,000).

The artist, David Datuna, posted a video of the stunt on Instagram titled "Hungry Artist," which showed him shoving the banana in his mouth in front of a group of shocked and giggling art patrons.

He was then taken aside for questioning by an unamused representative of the Paris-based Galerie Perrotin, which represents Cattelan. 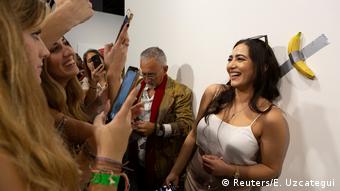 The art is the 'idea'

According to Cattelan's representatives at the Galerie Perrotin, the work was not destroyed.

"He did not destroy the art work. The banana is the idea," Lucien Terras, director of museum relations for Perrotin, told the Miami Herald.

According to Terras, the buyers purchased a certificate of authenticity, which gives them ownership over the idea. The bananas are replaced after they rot.

About 15 minutes after Datuna's stunt, another banana was taped to the wall. Perrotin said it would not press charges.

Cattelan is well-known for offering to loan a fully functioning 18-carat gold toilet called "America" to US President Donald Trump.