Maltese, Hungarians Vote in Favor of European Union | News and current affairs from Germany and around the world | DW | 13.04.2003

In parliamentary elections in Malta and a referendum in Hungary, the two countries' citizens expressed their will to join the European Union. They will sign accession agreements on Wednesday in Athens. 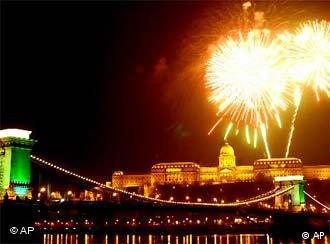 Looking forward to the EU: fireworks in Budapest

As counting was still underway, Maltese Prime Minister Fenech Adami declared victory in parliamentary elections on Sunday. Pollsters had indicated that Adami's pro-European Nationalist Party had won between 51 and 52 percent of the vote, confirming its place in government.

"The Nationalist Party has won the election with an absolute majority. We respect the people's decision," Labor Party leader Alfred Sant conceded. Labor won around 47 percent of parliamentary mandates.

Last month nearly 54 percent of Maltese voted to join the European Union in a non-binding referendum. But the Labor Party, which opposed EU membership, refused to recognize the result, saying that, taking voter participation into account, only 48 percent of Maltese citizens had cast their ballots for Brussels.

Prime Minister Adami then called for early elections to resolve the issue in time for an EU summit in Athens on Wednesday, where candidate countries are due to sign accession treaties to the union.

On Saturday 96 percent of the population went to the polls, leaving little room to speculate on their choice anymore.

"God willing, on Wednesday I will be in Athens to sign the accession treaty," a jubilant Adami exclaimed.

Hungarians saw the results of their Saturday referendum the same night. As expected, a clear majority in the former communist country -- nearly 84 percent -- voted "yes" to EU membership.

Although only around 44 percent of the eight million voters there could be bothered to cast ballots, the result is still considered binding.

"Europe is a chance and an opportunity for every citizen of the republic…We arrive in a richer, safer and calmer world, into a reunified Europe," Prime Minister Peter Medgyessy told thousands of Hungarians celebrating on the banks of the Danube in the capital, Budapest, on Saturday night.

Many Hungarians see membership in the European Union as a route to an improved economic situation. It seems that their politicians may, too: all four parties in Hungary's parliament campaigned for joining the EU.

Along with Malta and Hungary, Slovenia has also received approval from its citizens in a referendum to join the currently 15-member union. The Czech Republic, Lithuania, Poland and Slovakia will hold referenda on EU membership in May and June.

The ten candidate countries, which also include Cyprus, Estonia and Latvia, are expected to formally join the union in May 2004.

The European Commission recommends ten candidate countries to join the European Union in 2004, but fails to give Turkey a date. (Feb. 21, 2003)

This Saturday, Hungarians will most likely give resounding approval to their country's future membership in the European Union, the third country of nine of the 10 candidate countries to hold referendums on membership. (April 10, 2003)