Northern Mali is on the brink of a "major humanitarian disaster," according to Amnesty International. The Tuareg movement MNLA has proclaimed independence in the vast, arid region. 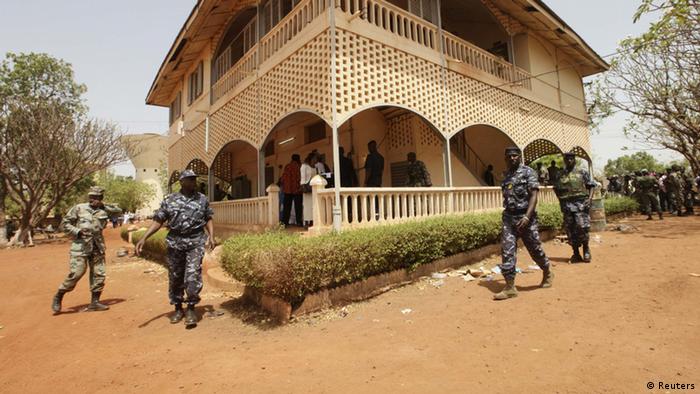 Amnesty says aid agencies must be allowed to deliver relief supplies to three cities - Gao, Kidal and Timbuktu - whose residents, it says, have been trying to escape looting and chaos toward Mali's south or to neighboring countries such as Mauritania.

Ivorian officials said the aim was to reverse last month's coup by junior officers in Mali's southern capital Bamako and preserve Mali's territorial integrity after the recent rebel advances in the north.

The UN refugee agency, UNHCR, said at least 215,000 people have fled northern Mali and that hundreds continue to cross into the neighboring countries of Burkina Faso and Mauritania every day.

Algeria, meanwhile, says seven of its diplomats are missing in northeastern Mali after its consulate in Gao was stormed. Witnesses say raiders hoisted the Salafist Islamist flag of another rebel group.

The National Movement for the Liberation of Azawad (MNLA) said on its website that it had "liberated" its homeland of "Azawad" and denounced the apparent kidnappings in Gao.

It called for international recognition of the territory, after declaring that the MNLA had ended its military operations in the town of Douentza, 600 kilometers (375 miles) from Bamako.

French Defence Minister Gerard Longuet dismissed the MNLA proclamation: " A unilateral declaration of independence which is not recognized by African states would not have any meaning for us," he told Reuters.

Who is in control?

"From what we know, the MNLA is in charge of nothing at the moment," the source said.

Instead the source referred to separatist Tuareg leader-turned-Islamist Iyad Ag Ghaly and his rebel group, Ansar Dine, saying "it is Iyad who is the strongest and he is with AQIM," the acronym for al Qaeda in the Islamic Magreb.

The West African country of Mali is on the brink of descending into chaos. A Touareg rebellion in the north and a military coup in the capital have destabilized the country. The tensions could result in war. (06.04.2012)

Last weekend Ag Ghaly's forces took control of Timbuktu, where women have since been told to cover up and thieves threatened with amputations under Sharia law.

Timbuktu Mayor Ousmane Halle was quoted by the Associated Press as saying the Islamist faction controlled the city's military camp, while the MNLA was stationed at its airport.

"The problem for us is that we do not know who is the master of our town," he said.

The mayor said 300 Christians had fled Timbuktu after Ag Ghali threatened on local radio to "eliminate" all who "oppose the development of Islam."

Ousmane Halle added: "These are people that have lived side by side with us for centuries. I cannot guarantee their safety."

On Monday, the West African bloc ECOWAS imposed sanctions to force the coup soldiers based in Bamako to defer to civilian rule. On March 22 the military ousted Mali's elected President Toumani Toure.

The bans, including a halt in vital fuel deliveries, have left Bamako residents facing power blackouts, with generation reduced to 50 percent.

"Mali has never experienced such a situation," said Mali's UN ambassador Omar Daou. "Our people are divided. Our country is threatened with partition."