Malaysia’s top court has upheld a ban against a Catholic newspaper, which had wanted to use the word "Allah" to refer to God. The weekly insists that the ban is unconstitutional. 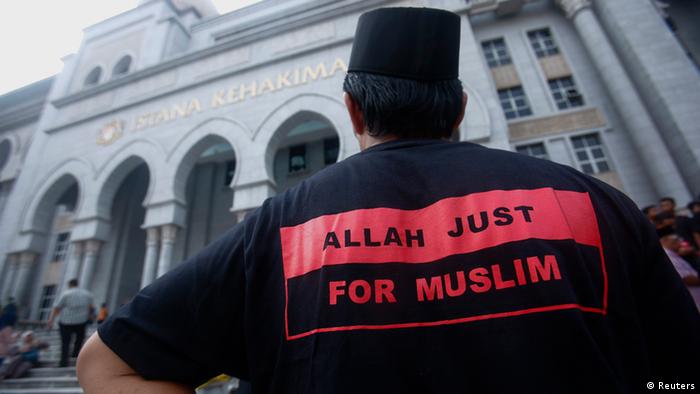 The Federal Court in Malaysia dismissed an appeal by the Malaysian Catholic weekly The Herald on Monday, ruling in favor of an appeals court which had banned the newspaper from using the word "Allah."

Four of the seven justices ruled that "the use of Allah is not an integral part of the Christian faith."

The Herald criticized the court's decision soon after its release, insisting that it was infringing upon minority rights in the ethnically diverse South Asian nation.

"We are disappointed. The four judges who denied us the right to appeal did not touch on fundamental basic rights of minorities," the newspaper's editor, Rev. Lawrence Andrew, wrote.

"[The ruling] will confine the freedom of worship," Andrew added. "We are a minority in this country, and when our rights are curtailed, people feel it."

The legal dispute stems from a previous government ban on The Herald from using the term. The daily had taken its case to court, arguing the ban was unconstitutional, and subsequently won an appeal in 2009. However, the court's decision to override the government sparked unrest in Malaysia, with some opponents of the ruling setting fire to and vandalizing Christian churches.

In October, The Herald reiterated its previous criticism of the ban, arguing that the term "Allah" has been the common term for God in the Malay language for centuries and should not pose a problem to Muslims.

Muslims comprise roughly 60 percent of the ethnically and religiously diverse country's population, while Buddhists account for about 19 percent and Christians roughly 10 percent. Approximately 50 percent of Malaysians come from the ethnic Malay community, and a further 23 percent from the ethnic Chinese community.

Malaysia court bans use of word 'Allah' by Christian newspaper

An appeals court in Malaysia has banned a Christian newspaper from using the word "Allah" to refer to God. The newspaper has called the ruling unconstitutional and has vowed to take the case to the federal court. (14.10.2013)

The difficulty of maintaining racial and religious harmony in Malaysia became clear last week with the withdrawal of a law that would allow only one parent to give consent for the religious conversion of a child. (17.07.2013)