Malawi's High Court has ordered a partial election recount following vote-rigging complaints from the main opposition party. The Electoral Commission has been ordered not to announce results. 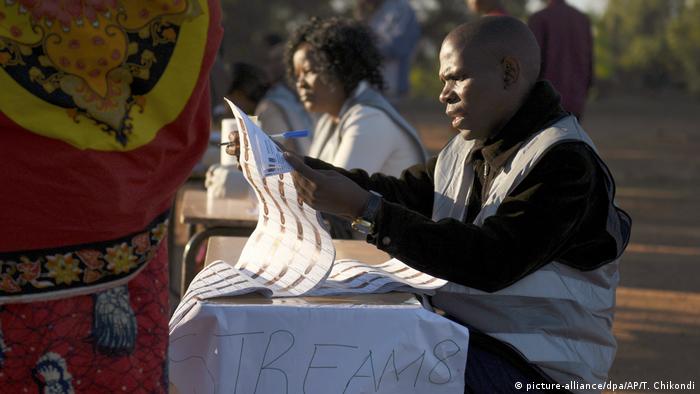 Malawi's High Court has received a total of 147 complaints from some of the parties involved in Tuesday's vote.

Lazarus Chakwera's Malawi Congress Party (MCP) told the court it had found irregularities in results from 10 of the country's 28 districts, ranging from a use of correction fluid, or tippex, on altered vote count sheets to the same handwriting coming from polling stations which were miles apart.

"The tippex itself should be a red flag," said MCP spokesman Eisenhower Mkaka. "It should be an indication of an anomaly and it should be a wake-up call to the Malawi Electoral Commission that someone is trying to play some games. What we are seeing is a fraudulent election, the result has been tampered with."

Late Saturday, the High Court ordered a halt to the release of results and a recount in a third of voting districts. "The announcement of presidential results is stayed until the results ... are verified through a transparent recounting of the ballot papers in the presence of representatives of political parties which contested the elections," it said.

The Electoral Cmmission's director, Jane Ansah, said she would wait for the legal process before announcing the results. She gave no indication of when this could be.

Under Malawian election law, complaints should be resolved and results announced within eight days of the election.

Reacting to the news, protesters in the capital, Lilongwe, threw rocks at government buildings and tore down ruling party posters. Police deployed armored trucks in an attempt to control the crowd.

Before the count was halted over the complaints, the MCP's candidate Chakwera was reported to have taken 35.4% of the votes tallied in three-quarters of the polling stations. Incumbent President Peter Mutharika was reported to be leading with 40.9%.

Chakwera said his own party's estimates indicated he was leading in the count.

The third-placed candidate, Vice President Saulos Chilima, who had gathered 18% of the partial count, called for "nullification of the aggregated vote."

The 78-year-old Mutharika has recently faced accusations of corruption and favoring rural areas where he has most political support.

Vote counting is underway after Tuesday's elections. President Peter Mutharika, hoping for a second term, is battling to hold off two serious rivals. (22.05.2019)