They are small, they strike at night and they can be deadly: mosquitos carrying malaria. It's one of the deadliest diseases in Africa. Yet it’s quite easily preventable. 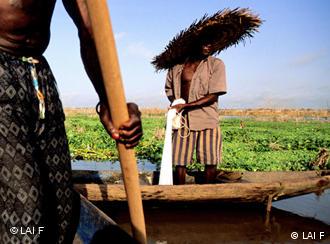 Swamps and lakes are a favourite breeding ground of mosquitos.

Malaria is one of Africa's biggest plagues. It kills almost a million people a year around the world. 90 % of those who die are in Africa. Pregnant women and small children are particularly vulnerable. It's mostly the poor who die, because they often can't afford any treatment once the first symptoms break out.

In any case, prevention is better than cure. Some forms of malaria don't react to many available drugs anyhow. But prevention tends to be simple. For instance, sleeping under a mosquito net or by wearing long-sleeved clothes after sun set.

For other useful hints, tune in to our new series about malaria. We follow one African family in its quest to eradicate malaria. And, on the way, they teach us what we can do against it.

Learning by Ear - Malaria - 08 - War against the unwelcome guests.mp3

Learning by Ear - Malaria - 05 - A stitch in time saves nine.pdf

Learning by Ear - Malaria - 05 - A stitch in time saves nine.pdf

Learning by Ear - Malaria - 08 - War against the unwelcome guests.pdf

Learning by Ear - Malaria - 08 - War against the unwelcome guests.pdf