Founded in Kabul, the 'Mobile Mini Circus for Children' are bringing their show to audiences in Germany and Denmark. 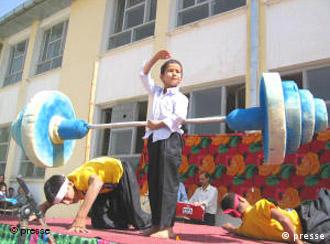 Laughter is their aim

Created in 2002 as a child-protection project, the Mobile Mini Circus for Children, or MMCC, started with one main goal: "to make Afghan children laugh."

As Afghanistan attemps to reconstruct everything from clinics to wells, the circus is the only organization that fosters the arts among Afghan children all over the country. The project combines a children's performance group and daily lessons in juggling, mask-making, acrobatics and other performance arts. 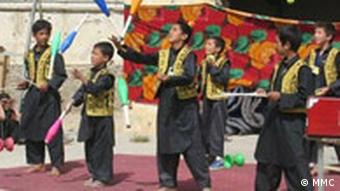 When the circus went on it's first tour, hundreds of thousands of children all over Afghanistan saw the first circus of their life. Thanks to international funding the Mobile Mini Circus for Children will be able to bring a condensed version of their show to audiences in Germany and Denmark as part of a "Kinder Culture Caravan."

Learning About the Germans

Shir Khan, a 24-year-old actor stands in front of a map of Germany that adorns the wall of a small room in Kabul. He points to the map: "Most of the people in Germany are Christians; they have a God, too. There are Muslims in Germany as well, but not nearly as many as here."

A group of children sits cross-legged on the ground, attentively following Khan's words. "What is the capital of Germany, Bonn or Berlin?" one of them asks. "What is the most famous place in Germany?" another child wants to know.

The children are also shown pictures of forests and half-timbered houses, along with castles such as Neuschwanstein. Also included are photos of Frankfurt; with its imposing skyline, and Berlin. Some of the children have heard about the Berlin Wall, but Shir Khan is not able to answer all of their questions about why the wall was built, how high it was and how long it stood.

The circus' trip to Germany is a big adventure. "The children will do acrobatics, juggling, ride unicycles, walk on stilts and perform as clowns," says David Mason, one of the founding members of the circus. In addition, the group will present excerpts of programs they've performed in Afghanistan. For example, "The Humming Mosquito," in which a boy in a green bodysuit with red paper wings tied to his back plays a malaria-carrying mosquito that trys to bite other performers as well as curious young onlookers. 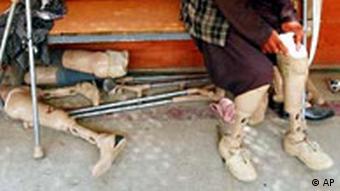 Most of the performances in Afghanistan deal with the grave dangers young people face in their daily lives, such as landmines and diarrhea. "Warning: Landmines!" is the name of another piece, that will be performed in Germany. "We don't re-enact scenes of death and horrible injury here," says Berit Mühlhausen, the circus' other founding member. "Instead, we put a monkey on stage, who gets hurt badly."

In reality, children die every day in Afghanistan after stepping on landmines. Several million of these deadly weapons are still slumbering just below the surface of the ground. It is estimated that it would take more than 20 years to clear or destroy them all.

The Children's Mini Circus has been in existence for two and a half years. Today, it provides artistic training for about 80 children, ranging from storytelling and puppet theater to sports and creative radio journalism.

Last year, the Children's Circus brought laughter into the lives of some 25,000 children and students attending schools in Kabul. Nationwide, the circus performed for an estimated 300,000 young viewers. 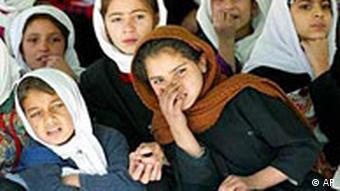 Afghani students at an all-girls school

These shows help children to deal with the trauma of war and the resulting psychological stress. "When our oldest performers play in rural areas, there is sometimes a mullah or former Taliban sitting in the audience," David Mason relates. "At first, they sit there unsmiling with crossed arms, but, the longer the program goes on, the more the stern faces relax, and at the end they even join in the laughter and applause."

Under the Taliban music and theater performances were banned. The circus that European audiences will see is a theatrical image of Afghan society with performers representing all of major ethnic groups. After 25 years of civil war Afghanistan's Uzbek, Tajik, Hazara and Pashtun peoples have relatively little to smile about. Still, if the laughter and smiles at their performances are any indication, perhaps the Childrens Mini Circus is a good first step toward building a brighter, funnier future.

Germany to Assist With Afghan Elections

For the first time since the fall of the Taliban regime, Afghanistan will elect its parliament on Sept. 18. The NATO-lead international forces continue to play a key role ensuring safety and stability. (Sept. 7, 2005)

Learning to Learn in Germany

After years of war and unrest, coming to Germany was like a dream for a group of Afghan students. They experienced a completely different type of school, learning with computers and experimenting with creativity. (Sept. 7, 2004)

NATO's ISAF mission has a huge job ahead of it. It is supposed to safeguard elections in Afghanistan, and keep peace in the country until 2006. Hikmet Cetin, NATO representative in Kabul, talked about ISAF's timetable. (Feb. 17, 2005)