Doll icon Barbie has had just about every profession -- astronaut, superhero, high-powered lawyer -- but she's never been German chancellor. Girls who want that role model will have to get the new Angela Merkel doll. 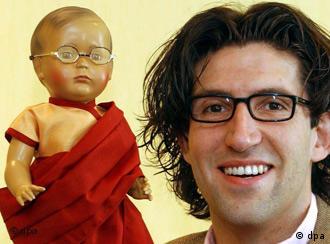 Not everyone is deemed worthy of getting his or her own likeness in a doll, but doll maker Marcel Offermann thought the fact that Angela Merkel will be Germany's first female chancellor was worth putting his skills to work.

It almost didn't happen, just as there was some doubt as to whether Merkel would actually enter the history books as the first woman to make it to the very top of German politics. Shortly before the Sept. 18 elections, Offermann signed a licensing agreement with a toy company to produce a Merkel doll. 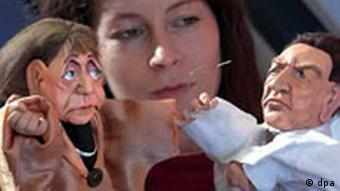 Merkel's already been in puppet form, sparring with Gerhard Schröder

But his dreams were threatened after the disastrous election results of Merkel's Christian Democrats. And during the ensuing weeks of political haggling, Offermann was unsure whether or not he would have to shelve his plans to create a 46-centimeter effigy of the former physicist from East Germany.

On Monday, it became clear that work on Angie, the doll, could continue. She will be following in the exalted footsteps of other Offermann creations such as the Dalai Lama and Pope Benedict XVI.

Angie the doll won't exactly be all dolled up in her plastic form. She'll be wearing simple, dark blue pants and a lavender t-shirt and will have a hair-do that's pretty close to the coif she has in real life. According to Offermann, the future chancellor has a "unique style" that was not difficult to translate into doll form. She'll be unveiled officially next Monday.

But girls who might want their parents to buy an Angie doll to perhaps preside over a cabinet or Barbies and Kens will have to do some serious lobbying. Angie doesn't come cheap -- her retail price will be 185 euros ($222).

She may not have been thrilled with the comparison at first, but a housewife from Lübeck is enjoying a burgeoning career as chancellor candidate Angela Merkel's double. (July 28, 2005)

In an astonishing transformation, CDU leader Angela Merkel went from dowdy schoolmarm to polished Powerfrau in a matter of months. But who gets the credit? Two top stylists have rival claims to this Cinderella story. (Sept. 30, 2005)

Read a selection of DW-WORLD's "And Finally…" brings you news on weird and wacky happenings from all over Germany.