At least 262 people have died after a powerful 7.8-magnitude earthquake struck off the coast of Ecuador. Vice President Jorge Glas has called for an evacuation of coastal areas as a precaution against rising tides. 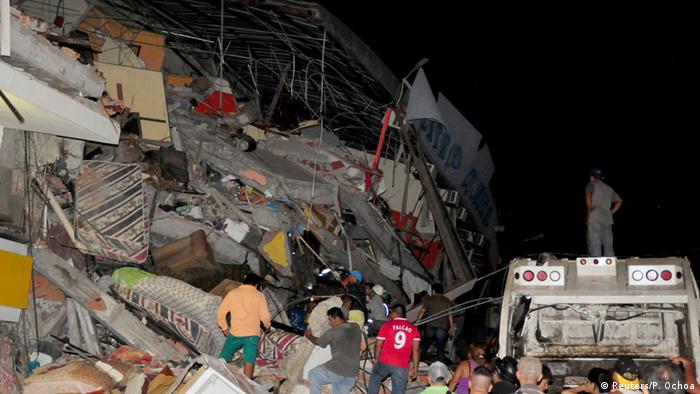 The quake, which was the strongest to hit Ecuador since 1979, flattened hundreds of buildings across several towns and cities.

A local official in the town of Pedernales, near the epicenter, appealed for earth-moving equipment and additional rescuers as local teams struggled to cope with the disaster.

"This wasn't just a house that collapsed; it was an entire town," said Pedernales' Mayor Gabriel Alcivar.

On Sunday, officials said the death toll had climbed to at least 262, while some 2,500 people were confirmed as injured. The toll continued to rise throughout the day, and authorities have declared a state of emergency in six provinces: Esmeraldas, Los Rios, Manabi, Santa Elena, Guayas and Santo Domingo.

More than 10,000 members of the security forces were being mobilized, but rescuers struggled to reach many of the worst-hit areas due to landslides.

The tremor could be felt as far away as the capital, Quito, which lies about 170 kilometers (105 miles) from the epicenter. Buildings in the city showed signs of cracks and some residents lost power and telephone services.

Several other cities suffered damage too. A bridge collapsed in the port city of Guayaquil, and in Manta the airport was forced to close after the control tower was damaged.

Earlier, the Pacific Tsunami Warning Center said tsunami waves ranging from 0.3 to 1 meter (1 to 3 feet) could impact some coastal areas. But later it reported the tsunami threat had mostly passed.

Vice President Jorge Glas called for people in coastal areas to evacuate as a precaution against rising tides.

President Rafael Correa, who was in Rome after attending a papal conference, is now on his way back to Ecuador.

The US Geological Service said the earthquake's epicenter was near the town of Muisne, a sparsely populated area in the south-southeast of the country. It occurred at a depth of 19 kilometers (12 miles).