Mainlining malaria: why wait on a mosquito when you can inject for research in Africa? | Science| In-depth reporting on science and technology | DW | 29.07.2014

Celebrating a new treatment for malaria is one thing. Celebrating a new way to infect people with the parasite is another. But researchers say injecting volunteers with malaria yields better results. 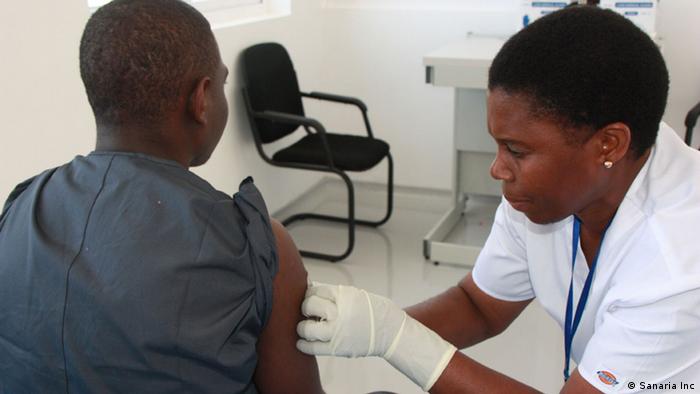 A volunteer gets injected with malaria parasites

If you are a researcher developing a drug against malaria, you will need volunteers who are infected with the disease.

But because you will want to be able to compare your results as you progress, your volunteers will all have to be infected with the same, particular strain. And the malaria will have to be at a particular stage in its development.

Basically, you will need to use a standard model for your research.

And until now, it's been common for volunteers to allow themselves to be infected by live mosquitoes in a lab. They would put an arm inside a box full of mosquitoes and wait to be bitten.

But it's inefficient science waiting on a mosquito.

So researchers have been looking for a new method to infect volunteers with malaria - but without mosquitoes.

Syringes are better than mosquitoes

An international research team, including scientists at the Ifakara Health institute in Tanzania and from the US company Sanaria in Rockville, Maryland, seems to have found a way, according to a new study published in the "American Journal of Tropical Medicine and Hygiene".

They injected a solution containing frozen malaria parasites under the skin of 23 volunteers in Tanzania. All but two of the volunteers got ill. They were cured with anti-malaria drugs.

The researchers say their product, containing the frozen malaria parasites, would simplify and speed up testing of new malaria vaccines and drugs.

It would be more efficient, they say, than the old method using live mosquitoes, and better for way controlling test results. 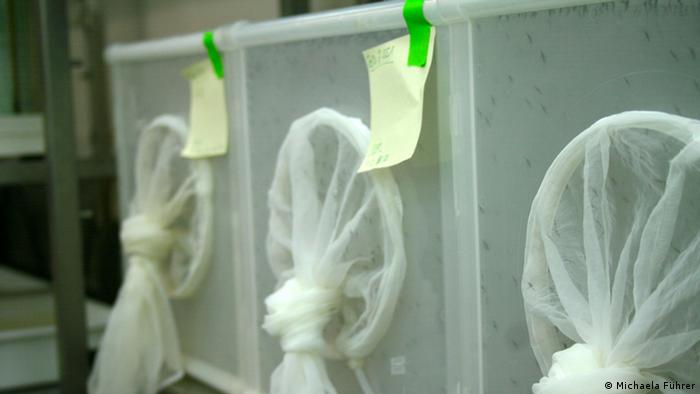 Malaria research as it is: these boxes are full of infected mosquitoes

"When the mosquito bites there is no control about how many parasites the mosquito injects into you," says Michael Good, malaria researcher at Griffith University in Queensland, Australia.

Professor Good has written a commentary on the study, but was not directly involved.

"Some mosquitoes might inject 10,000 parasites, while some might inject as few as 20 or 10 or even less. You have really no way of controlling that," says Good.

To achieve their malaria "cocktail" the researchers dissected infected mosquitoes and scraped the parasites from their saliva glands. They cleaned the parasites of all mosquito remains, dissolved them in a liquid - at a certain concentration - and then froze them.

When it is time for testing, scientists take the parasite extract out of the freezer and inject it into volunteers with a syringe.

"So you know exactly how many parasites you are giving to people," says Good, adding that the method will make drug trials simpler and cheaper.

But not only that - the new method will also enable research in the countries where it matters most.

Research on location in Africa

"This innovation is a game-changer for malaria research and development in Africa," says Stephen Hoffman, chief executive and scientific officer at Sanaria.

The researchers say malaria drug trials, using infected living mosquitoes, have tended only to take place in research institutions in the US and Europe - the main reasons being that researchers need high-security facilities, and only use a certain Anopheles mosquito species.

There is nothing particularly special about the species, but researchers happen to have chosen it as a standard in their trials.

The strain is common in Asia, and it was chosen over an African strain simply because researchers have had more experience with it. The mosquitoes may also be easier to maintain in laboratories.

But to this day, the decision to work with an Asian strain - years ago - continues to have consequences for malaria research in Africa. 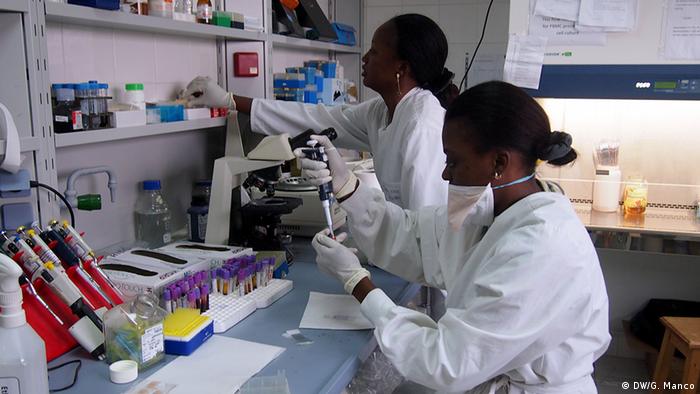 "Building such a [research] facility within Africa would have been prohibitive due to the risk of introducing a new species of mosquito," the researchers say.

But by using frozen malaria parasites, Hoffman says, African research labs will be able to play an important role in research.

"This is about making available within Africa the same research tools to study malaria that we have in the USA and Europe," he says.

Why volunteer to catch malaria?

More than 1500 volunteers have voluntarily caught malaria for research - Professor Michael Good is one of them.

He volunteered to help test the parasite cocktail on non-African people who have never before been exposed to malaria.

"I got a malaria infection that's part of the study. But it's fine. It is safe. It's all controlled, everyone is followed very carefully and there is no risk to the volunteer," Good says.

For this study, the researchers recruited 24 men from higher learning institutions in Dar es Salaam.

"The volunteers do it out of their goodness of heart," says Good. "They're trying to do something to rid the world of malaria."

As Good points out, human trials are essential.

"You can go a certain distance with laboratory animals, like mice, but you can't really know if something is effective when you put it into a person."

Despite the high success rate with their injected parasite solution, the researchers are still trying to find out why only 21 of the 23 volunteers contracted malaria. Professor Good says in future trials they should inject the parasite directly into the blood - rather than just under the skin.

Most malaria vaccine candidates work by preventing parasites from entering human red blood cells. A newly discovered antibody takes a different approach: it traps the parasites inside the cells. (22.05.2014)