Magna Carta at 800: What role does it play today?

The Magna Carta was signed 800 years ago in England. Now, the United Kingdom is facing an identity crisis. Could the UK benefit from a written constitution? Is the medieval document relevant to contemporary Britain? 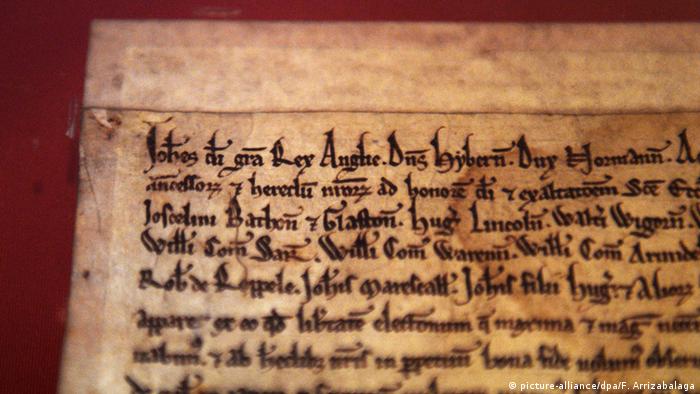 It was in the quaint water meadow of Runnymede on June 15, 1215, that one of the world's most influential historical documents was signed and sealed, but never really quite delivered - at least not on its home turf.

The Magna Carta, Latin for "Great Charter," was a peace treaty forcibly signed by King John of England at the will of barons who were rebelling against his rule.

It was this collection of clauses that led the way for many written constitutions around the world, perhaps most notably the US Constitution, the Universal Declaration of Human Rights (UDHR) and the European Convention on Human Rights (ECHR). Only four copies of the original Magna Carta have survived to see their 800th anniversary. Despite the Magna Carta's recognition as a founding document of modern democracy and formal objection to the arbitrary use of power, Britain is one of only three major democracies in the world whose entire constitution is uncodified. The other two are Israel and New Zealand.

Instead, the UK - nowadays England, Scotland, Wales and Northern Ireland - has opted for an unwritten constitution: a patchwork drawn from common and case law, a host of historical conventions, Acts of Parliament, and treaty obligations such as those seen within EU legislation.

Today, only three of the original 63 clauses within the Magna Carta remain on statute in England and Wales, namely the right to justice and fair trial, the freedom of the church, and the "ancient liberties of the City of London."

Dr Emm Johnstone, a historian and the Magna Carta Project officer at the University of London's Royal Holloway college, told DW that the 800-year-old document continues to be relevant to contemporary issues, particularly those surrounding freedom and liberties.

"The Magna Carta is very much relevant at the moment when it comes to national security issues," Johnstone told DW. "Is it okay to take a suspected terrorist, keep them under house arrest or in jail without telling them what they've been charged with? If it's a time of war, then yes, but if not, its not legitimate."

Both the ECHR and the UN's UDHR consciously refer to the Magna Carta as the first document to enshrine human rights. And, Johnstone said, should the United Kingdowm withdraw from the ECHR, the Magna Carta would likely serve as the basis for any future national human rights document. 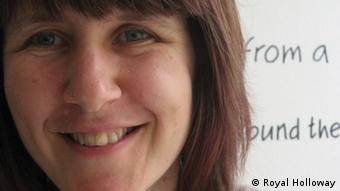 Many Brits are unaware of the significance of the Magna Carta. Back in 2012, even Prime Minister David Cameron failed to tell US chatshow host David Letterman the meaning of "Magna Carta" in English.

The gap in knowledge can be traced back to the British national curriculum, which largely ignores the centuries when England was under Plantagenet and Norman control.

"Of course we have a wealth of history that we want to talk about, but with the Plantagenets and the Normans, it's almost so far removed from us that there is the tendency to focus on other eras," Johnstone told DW.

She believes this can be remedied, however, by connecting the historical documents to contemporary debates such as online surveillance by government agencies.

"Young people will then be really enthused and thinking about what those liberties mean today," Johnstone said.

More trouble than its worth?

For Dr. Victoria Honeyman, a professor in British Politics at the University of Leeds in northern England, the idea of implementing a written constitution in Britain's current circumstances could create yet more issues for the four-nation confederation.

Scots, who held an independence referendum last September, may want their own constitution, especially as they already have their own legal system and are ruled from Holyrood as opposed to Westminster. Similarly, Northern Ireland and Wales would also likely have their own amendments.

Honeyman told DW that the flexibility of an unwritten constitution has enabled the UK to adapt and develop when necessary. 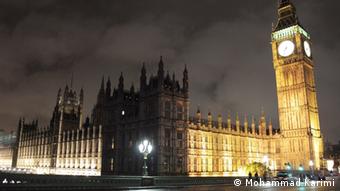 The UK currently has an unwritten constitution

"My worry about a written constitution is that it would have to be so prescriptive that it wouldn't actually be all that user-friendly," she says. "The other alternative would be to have a very loose constitution, which then begs the question whether it's worth the paper it's printed on."

A leader fit to champion change?

Historically, most constitutions have been written as a settlement following political upheaval, through war or revolution. As the UK currently stands, the writing of a codified constitution would instead be an administrative job. But, in 2015, who could champion this task? In France, Charles de Gaulle is remembered as the driving force behind the Constitution of the Fifth Republic, drafted by Prime Minister Michel Debre. The US Constitution is associated with historical figures such as George Washington, Benjamin Franklin and James Madison.

"When you think of some of the people who have pushed through written constitutions, they have been great war leaders," Honeyman told DW.

"At the moment in Britain, this is a completely different set of circumstances and I'm not seeing anybody who immediately springs to mind," Honeyman said.