Maduro takes over in Venezuela after paying tribute to Chavez

The hand-picked successor to Venezuela's Hugo Chavez has been sworn in as acting president. The opposition, however, says the move is unconstitutional. 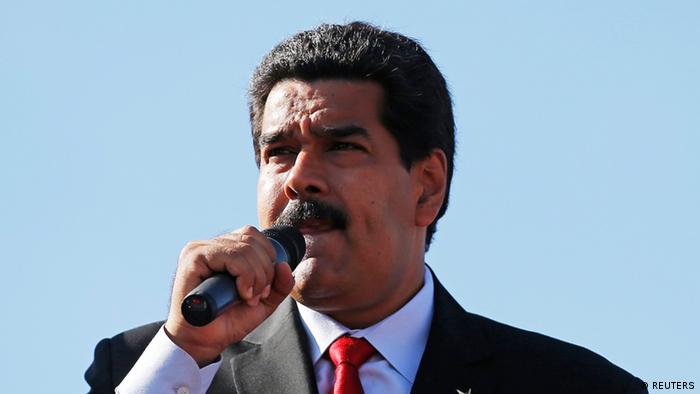 Hours after eulogizing Hugo Chavez, Nicolas Maduro was sworn in as Venezuela's acting president. Chavez's hand-picked successor took over late on Friday despite political opponents who say that his swearing-in violated the nation's constitution.

"I swear in the name of absolute loyalty to comandante Hugo Chavez that we will obey and defend this Bolivarian Constitution with the hard hand of the free people," Maduro said during his swearing in ceremony at the National Assembly.

Earlier in the day, Maduro stood before world leaders, celebrities and throngs of mourners gathered for Chavez's funeral. In doing so, he pledged eternal loyalty to the deceased leader.

"Here we are, comandante, your men, on their feet," Nicolas Maduro shouted. "All your men and women ... loyal until beyond death."

Maduro said of Chavez that no other Venezuelan leader, not even Bolivar, had faced and overcome such treachery and opposition. Chavez lost his battle with cancer on Tuesday, aged 58.

Other big names in the crowd included Hollywood star Sean Penn and the reverend Jesse Jackson, who said he hoped this week's events will bring the US and Venezuela closer together.

"We pray to God today that you will heal the breach between the US and Venezuela," Jackson said.

Both Maduro and the National Assembly Speaker Diosdado Cabello pledged to carry on along Chavez's vein, and push the late leader's socialist-inspired agenda.

Cabella swore in Maduro, saying afterwards that "Venezuela will follow the route to socialism."

Donning the presidential sash and naming Chavez's son-in-law, Jorge Arreaza, as his vice president, Maduro said he had asked the election authority to call a vote immediately.

An official announcement about the upcoming election is expected on Saturday.

Fireworks lit up the sky above Caracas at the end of the swearing-in ceremony.

Despite the outpouring of grief from the masses, the political opposition was churning as Maduro was sworn in.

Opposition leader Henrique Capriles accused Maduro of using the funeral to campaign for the presidency and had said earlier that the opposition would boycott Maduro's swearing-in, referring to it as unconstitutional.

Venezuela's 1999 constitution says the National Assembly speaker takes over as interim president in the event of a president-elect's death or inability to be sworn in. It also stipulates that new elections be called within 30 days.

So many believe that Cabello should have been sworn in, rather than Maduro. Yet, Cabello himself said on Thursday that the constitution was "very clear on what needs to be done, which is not anything else than swearing in the comrade Nicolas Maduro."

Capriles is expected to face Maduro in the presidential election.