Lufthansa to cancel hundreds of flights over strikes | Business | Economy and finance news from a German perspective | DW | 26.04.2016

Lufthansa to cancel hundreds of flights over strikes

Germany's flag carrier Lufthansa has said widespread strikes planned for Wednesday had forced it to cancel nearly 900 flights, leaving tens of thousands of passengers to make other travel arrangements. 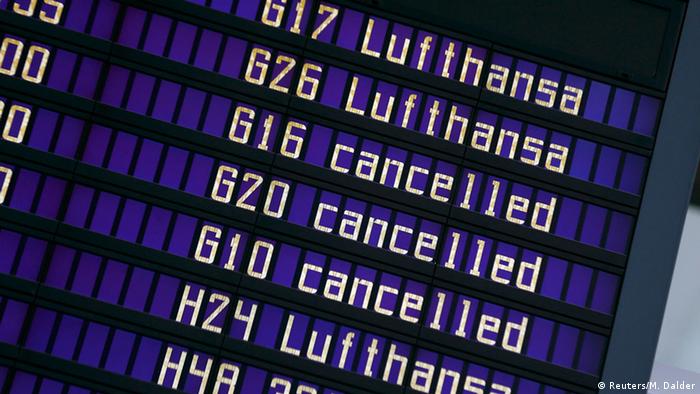 Some 87,000 airline customers won't be flying with Lufthansa on Wednesday when ground crew at six German airports are expected to walk off the job, the carrier said Tuesday.

The planned industrial action prompted a decision by Lufthansa to scrap 895 flights, the airline said in a statement. Under normal circumstances, Lufthansa would have flown around 1,500 flights to and from major German airports, including its hubs in Frankfurt and Munich.

The cancellations were made after the German trade union Verdi called upon airport workers in Düsseldorf, Cologne, Dortmund and Hnnover, as well as in Frankfurt and Munich, to strike.

The union is demanding a 6-percent wage increase for some 2 million public service employees it represents. It's also calling for a pay increase of 100 euros ($112.81) per month for trainees.