Lufthansa hands over some flights to discount partner | Business| Economy and finance news from a German perspective | DW | 16.12.2011

Lufthansa hands over some flights to discount partner

Lufthansa plans to work more closely with its discount subsidiary, Germanwings, to save money. But the move also means fewer options for passengers on many domestic and European routes. 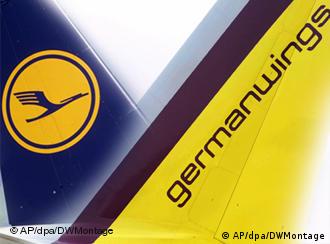 Lufthansa and Germanwings will cooperate closely

Passengers accustomed to choosing between premium carrier Lufthansa and its low-budget subsidiary are soon going to be forced to go with the one or the other, depending on the airport they typically use.

This week Lufthansa announced plans to introduce new flight plans both for itself and Germanwings in a bid to stop doubling up on routes and thereby competing with itself, as is currently the case.

Speaking in Stuttgart on Wednesday, Lufthansa Passenger Airlines CEO Carsten Spohr said he wanted his to be “the first airline to start making money again in European aviation.”

Today, passengers flying out of German airports can often choose between the premium carrier and its low-fare sidekick to travel to a particular destination. But given that some airports lend themselves more to low-budget than top-end flights, the dual offering is not always financially viable. 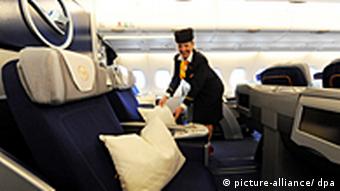 Luxury could be a thing of the past on some routes

The Cologne-Bonn airport, for example, has become a hub for low-cost airlines, while taxes at Düsseldorf, which is not a million miles away, make it prohibitively expensive for non-premium carriers.

Although such streamlining might sound sensible in practice, critics see several potential problems. One is the fact that although Germanwings has tried to incorporate some aspects of Lufthansa into its own service packages – such as offering the same frequent flyer program and granting loyal customers access to the airport lounge – it is ultimately still a no-trimmings airline. And that is not every flyer's fancy.

“When they are in the airport lounge passengers receive special treatment, but when they leave, they find themselves in an economy class environment,” aviation expert Cord Schellenberg told Deutsche Welle. “And they don't want to have to queue up for 30 rather than just 10 minutes to reclaim their baggage.”

Schellenberg says no low-cost airline has yet managed to successfully incorporate aspects of premium flight standards into their own modus operandi. 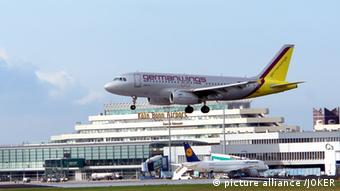 The Cologne-Bonn airport has become a hub for discount airlines

Even so, Lufthansa is not in a bad position to try out an either-or-strategy. While passengers are free to choose other premium airlines, they would lose certain privileges such as frequent-flyer miles.

What's more, although other top-of-the-range legacy carriers such as Air France and Swiss Air can deliver German-based travelers to certain destinations, they do not offer the same range of routes as Lufthansa and Germanwings.

“It will be hard for other airlines to provide the non-stop to the same variety of airports, and passengers don't want to have to change flights to get from say Stuttgart to Rome,” Schellenberg said. “Ultimately, they will accept a change from Lufthansa as long as they can still travel non-stop.”

There are already fears that in reducing the competitive element between Lufthansa and German Wings, prices will rise - a claim that Lufthansa refutes.

Spohr said that in using larger aircraft, both airlines would reduce check-in costs and thus help improve their financial performance.

German airline Lufthansa plans to boost passenger services to and from Berlin when the city's new international airport opens next year. It will also cut ticket prices in a bid to beat low-cost rivals at their own game. (11.11.2011)

Lufthansa is probed over pricing program

A Bavarian radio station is at the center of an internet storm after a presenter upset fans of K-pop boy band BTS. The host was quickly accused of racism after comparing the band to the coronavirus.