Lucky Luke made in Germany for the first time

The "lonesome cowboy" has been riding his horse through the Wild West for more than 70 years. Now, in the first official tribute book written by a German, Berlin comic artist Mawil is giving Lucky Luke a cool new saddle.

DW: In your tribute to Lucky Luke, the Western hero's saddle is not on a horse, but on a bicycle — an unusual vehicle for a cowboy…

Mawil: I'm a big bicycle fan. In my stories, I always include something that I personally enjoy. I spend around an hour a day riding my bike in Berlin; I've been on a bicycle tour through the Baltic states with my old East German Diamant bike and on a mountain bike tour through the mountains of Georgia and Azerbaijan... So my Lucky Luke album is therefore a love declaration to this means of transportation. I think the world would be a better place if more people would cycle. 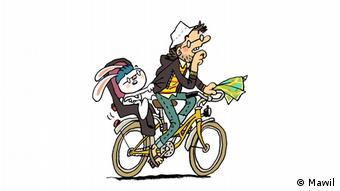 Comic book artist Mawil on his bike with one of his trademark characters, "Supa-Hasi"

The reader of your comic book learns how the modern bicycle replaced the initial high wheeler. You depict two bicycle manufacturers, Pope and Overman, as fierce competitors in the establishment of the industry. A true story?

Certainly not the way I depict it. I did a little bit of research on the history of modern bicycles and came across several manufacturers in the USA. What is historically true is that Pope was the largest, and Overman was one of the first to license modern wheel manufacturing.

The rest — the hunt for the Wild West prototype, the involuntary stop at the indigenous totem pole, the San Francisco bicycle race — is all invented. Incidentally, that's what Lucky Luke's creator Morris did. He used historical figures such as the Daltons and developed his own characters out of them. 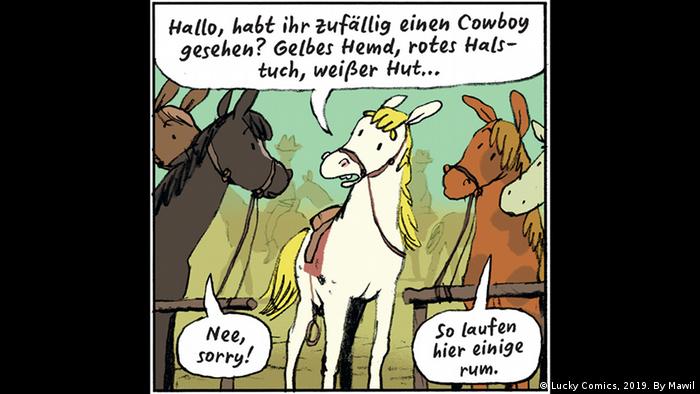 Jolly Jumper is still part of the story...

And Lucky Luke does not just fight crooks and Native Indians in your story...

I've included references to problems cyclists face today, for example the common problem that you can't take your bike with you on every train. The railway company isn't among the good guys in my story, even though I'm a fan of [German railway company] Deutsche Bahn and its train conductors — I rather dedicate this part of my homage to the executives of the company, who only have profit on their mind.

Morris created the lonesome cowboy who shoots faster than his shadow more than 70 years ago. It probably wasn't an easy task to slip into his Western boots?

My huge respect for his legacy and the fact that it was my first time drawing a figure that wasn't my own creation made it difficult at the beginning. But then I just started — after all I had to complete the project at some point.

My book is a tribute to Lucky Luke; it's the third in a special series; two other titles were done by French cartoonists. That means I didn't have to follow all the former guidelines to make sure that every ear and every hand looks exactly like the original. 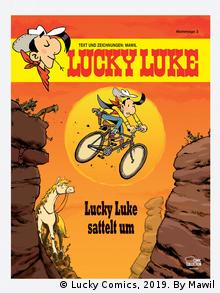 An English version of the comic is being prepared

You spent about a year working on the story that contains more than 600 frames. How did you manage not to loose track?

The hardest thing for me was to come up with the initial idea. Then, after I developed the story with the bike, all I had to do was invent funny things about cycling, and carry them to extremes — in a Wild West context.

So I started by creating a storyboard, building into the storyline all the jokes that occurred to me. Then I created rough sketches of all the pages as they should later appear in the book, often changing the order of things by cutting out boxes and sticking them to the next page during this phase. When I felt that the rhythm of the storyboard was right for me, I started the proper drawings.

And that's all manual work?

Yes, I do all my drawings by hand and preferably in pencil. I like the lively scratchy line of the pencil. Then I scan all the frames and add colors using my computer.

How did you get the honor to create this official tribute to Lucky Luke? It doesn't sound like something you'd send a job application to…

I would never have dared come up with this project idea myself — the publisher came to me. They obviously didn't put up an ad, but rather contacted me directly to find out if I could imagine doing this. They knew my previous books and apparently trusted me to be up to the task.

So it's an accolade for a comic book author?

Of course. I was already a fan of comics in my childhood. I grew up in East Germany, and there weren't that many available so I read everything I could put my hands on. I would also redraw some comic figures, among them Lucky Luke. At the time I never could have even dreamed that I would one day publish an official book of my own.

Markus Witzel alias Mawil is a Berlin comic artist. He works for numerous magazines and newspapers. His 300-page graphic novel Kinderland, about childhood in East Germany, was rewarded with the Max and Moritz Prize in 2014 in the category best German-language comic book.

Tintin and his trusty sidekick Snowy have been fighting crime, solving mysteries and surviving controversy for 90 years. And the Belgian reporter continues to attract new fans. (10.01.2019)

Asterix and Obelix are well known names, but sometimes the main characters of the best-selling comic series were creatively renamed in translation. Who are Yali, Witblix and co? Find out here. (17.10.2017)