Best known for designing the glass pyramid in front of the Louvre, Chinese-American architect I. M. Pei has left traces of his inimitable modernist style all over the world. He turns 100 on April 26.

Chinese-American architect I. M. Pei has a lifetime of achievement to look back on. From the John F. Kennedy Presidential Library to the Bank of China in Hong Kong, his masterpieces are strewn across the globe, embodying the ideals of the modernist era like few others. But Pei wasn't always popular with his contemporaries.

In fact, his most recognized structure, the pyramid in front of the Louvre Museum, attracted so much controversy from the time of its inception to completion that it could almost have ruined his career.

But throughout his eventful life, the architect and designer, who celebrates his 100th birthday on April 26, never gave up on his vision.

Pei grew up in Hong Kong and Shanghai before studying at Harvard under Walter Gropius. He was then recruited by a real estate mogul in New York and established his own firm by the mid-1950s.

The 1963 assassination of charismatic US President John F. Kennedy marked a major turning point in his already-illustrious career: Kennedy's widow Jacqueline herself chose his proposed design for the John F. Kennedy Presidential Library and Museum, which, after numerous delays, was opened in 1979.

Pei said he considered the Kennedy Library "the most important commission" in his life, and he had wanted to honor it with a big pyramid of light at its center - an idea that was turned down at the time but would later would resurface in Paris.

Further prestigious projects followed across the US - in Dallas, Boston, Oklahoma City, and in Washington D.C., where I. M. Pei was commissioned to design the extension of the National Gallery of Art. Former French President Francois Mitterrand was taken by the modernist extension and decided that he would hire Pei for the Louvre in Paris in 1984 - even though Pei had never worked on a historic building before. 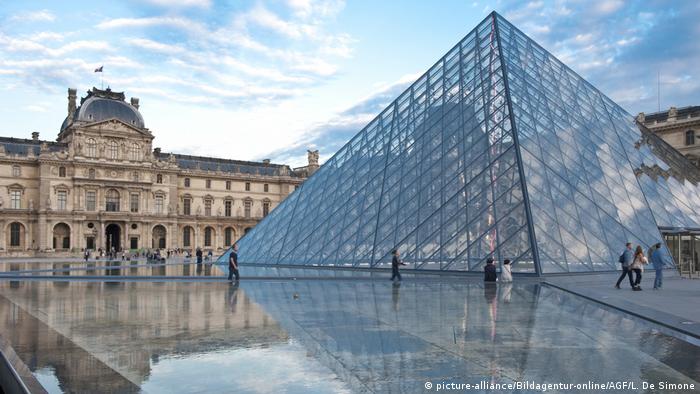 The pyramid at the Louvre Museum in Paris became I. M. Pei's greatest masterpiece, despite facing heavy opposition at first

A pyramid for the 20th century

Pei was largely shunned by critics and Parisians alike when he put his famous glass pyramid in front of the Louvre Museum in 1989. Up to 90 percent of Parisians were reportedly against the project at that time, and for a while it seemed that I. M. Pei would not be able to recover from the backlash. The Louvre's director at the time, Andre Chabaud, even resigned in 1983 in protest to Pei's design.

"I received many angry glances in the streets of Paris," Pei said about his experience during those difficult years. But once it stood, the true genius of the pyramid started to reveal itself: The three wings of the world's most-visited museum were linked underground with a vast system of galleries that were bathed in the light shining through the glass panels of the pyramid.

One by one, the critics became converts. The French daily newspaper "Le Figaro," which had led a campaign against the "atrocious" design of the structure, celebrated it with a special supplement on the 10th anniversary of its opening. Even Britain's Prince Charles, who makes no secret of his distaste for modernist architecture, said that I. M. Pei's glass pyramid was "marvelous."

Pei later remarked that after the uphill struggle of the Louvre, "I thought no project would be too difficult."

Just prior to the pyramid commission, I. M. Pei won the Pritzker Prize for his contributions to archticture in 1983, establishing himself as as one of the most iconic architects of the 20th and 21st centuries. In the decades since receiving the award, Pei worked on numerous other building designs, including the Javits Convention Center in New York, the Bank of China in Hong Kong, and, in 2003, theextension to the German Historical Museum in Berlin.

Click through the gallery above for a closer look at I. M. Pei's most significant works.

Where does it play? Germany's temples of culture

From old museums to new concert halls, from a princely residence to a coal mine: Germany's cultural venues are varied. Any selection of the most noteworthey ones must be incomplete - but we've given it a try. (10.01.2017)

Francis Kéré, a renowned architect from Burkina Faso, is to repurpose a disused airplane hangar at Berlin's former Tempelhof airport. Meanwhile, his works - including his famous opera village - are on show in Munich. (17.11.2016)

I. M. Pei has left his mark across the globe, with his signature style embodying the spirit of modernism. We take a look as some of his most iconic structures as he celebrates his 100th birthday on April 26. (26.04.2017)