Montenegrin authorities have detained a Polish citizen who allegedly started a wildfire that threatens the city of Bar. The man reportedly lit the fire to signal his position after getting lost in the nearby hills. 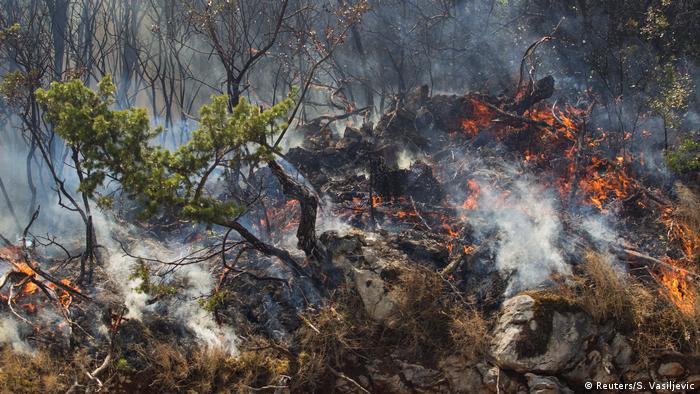 Montenegro has been hit by several forest fires this summer, including the one near the town of Tivat last month

Firefighters were battling the blaze at Montenegro's Adriatic coast on Wednesday, as high winds carried the fire from the hill of Susanj to the periphery of Bar. The officials deployed two airplanes and firefighting teams from across the small Balkan country.

The situation was "complex, but not critical," according to rescue chief Velizar Cadjenovic.

"The Susanj fire is not under control yet and it's spreading in two directions," he told the local media.

The officials asked the locals to cut down shrubbery in a bid to slow down the spread of the blaze.

In his previous media appearance on Tuesday, Cadjenovic said that flames spread through areas which are remote and difficult to access. He also blamed a Polish citizen for the wildfire.

"I have been informed that the fire was started by a mountaineer from Poland, who got lost on the hill and lit the fire to show his position. However, wind and dry vegetation caused it spread to large sections of the hill," he told the local Vijesti newspaper.

A group of local hunters found the Polish man late on Tuesday, according to state TV. He was immediately detained for endangering the public.

Due to a record-breaking heat wave this summer, Montenegro and the neighboring Croatia have faced dozens of forest fires in the regions popular with foreign tourists, especially along the coast.