Survivors left desperate in the wake of Typhoon Haiyan in the Philippines have turned to looting despite relief efforts. Over 1,500 have been reported dead, but officials expect that that number to rise significantly. 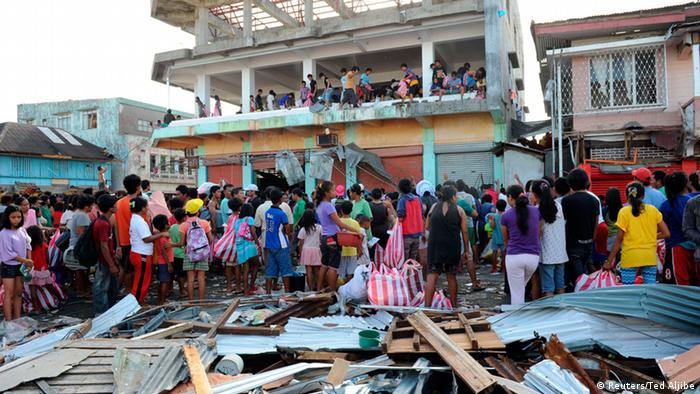 The Philippines is now contemplating the huge relief effort left by the devastation of Haiyan, which hit the archipelago on Friday with winds of around 315 kilometers (195 miles) per hour.

The national disaster relief program has given the official death toll figure as 1,774 but a final count of more than 10,000 victims was predicted by provincial officials on Saturday, with the island province of Leyte hardest hit.

Emergency and aid workers have begun the daunting task left by the destruction of the storm, while relief supplies are finding their way to affected areas. But it is coming too late for some survivors left without food, water and medical supplies for days, with looting in malls, convenience stores and health centers reported in Leyte's capital Tacloban City.

"In the coming days, I assure you that help will come faster," Philippines President Benigno Aquino said in a televised address, having already declared “a state of national calamity.”

"My only appeal is for people to be calm, pray, cooperate and help each other. These are the only ways we will overcome from this tragedy," he said.

Logistics and past mistakes loom over relief

Aid organizations are struggling through blocked roads and devastated airports to bring relief to the Philippines. But past experience suggests that even tougher tasks lie ahead for the country. (11.11.2013)

His comments followed those of national police spokesman, Senior Superintendent Reuben Sindac, to Manila-based radio station DZMM: "We cannot begin to understand the situation of those affected, but this is no reason to resort to crime and violence,” he said earlier on Monday.

Aquino has released $25 million for relief, while 22 countries have sent assistance.

The Vatican has also given $150,000 in their first contribution - the Philippines has Asia's largest Catholic population.

The United States is set to bolster their number of troops providing assistance in the Philippines from around 90 to about 270 over the next 24 hours.

US Marine Brig. Gen. Paul Kennedy said of Tacloban he did not believe there was "a single structure that is not destroyed or severely damaged in some way - every single building, every single house." His comments were made after taking a helicopter flight over the stricken city.

More than nine million people over 41 provinces in the Philippines have been affected by Haiyan. Many of the dead were killed by tsunami-like waves that reached a height of up to five meters (16 feet). More than 600,000 people have been displaced.

The storm moved on Monday to China and Vietnam, with at least five people reported dead in China. Haiyan made landfall in Vietnam's Quang Ninh province at around 5am local time (UTC+7). It had been downgraded to a tropical storm by the time it hit land, boasting winds of 120 kilometers.

Vietnamese media quoted the National Search and Rescue Agency as saying that 13 people died and 81 others were injured in heavy winds and storms as Haiyan approached the coast.

In preparation for the storm, Vietnamese authorities successfully evacuated hundreds of thousands of people.