Looking back on 30 years of DAX

It's not every day that a stock market index turns 30, but Germany's famous DAX is celebrating this milestone. The index is a living piece of the country's economic history. 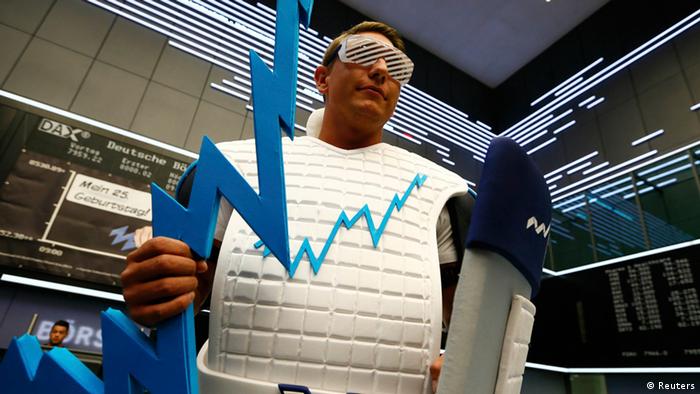 On July 1, 1988, Germany's DAX stock index went online for the first time with a value of 1,163.52 points. In January this year, the stock market barometer reached a peak of more than 13,500 points, although it has since gone down again in recent weeks.

Read more: German business morale drops as 'boom is over'

The fluctuations over the past 30 years have been wild. Hans-Jörg Naumer, head of capital market analysis at Allianz Global Investors, is quick to point out the Asian and Russian crises, the technology bubble at the turn of the millennium and of course the financial and euro sovereign debt crisis 10 years ago.

An index for everyone

Created by Frank Mella, an editor at a financial paper, the idea was to have a stock market index for the financial center of Germany. Up until then there had been various other indices, such as the FAZ-Index, which represented 100 companies.

But a standard stock index was a very important step, says Klaus Nieding, vice president of the German Shareholders Association (DSW). Since the implementation of the index, international comparisons have became easier.

"Such an index is like a technical standard in industry," explains Nieding. It also helped the general public to become more aware of stocks and Germany's standing in the world. Today reports about the ups and downs of the DAX are an important part of television news programs. 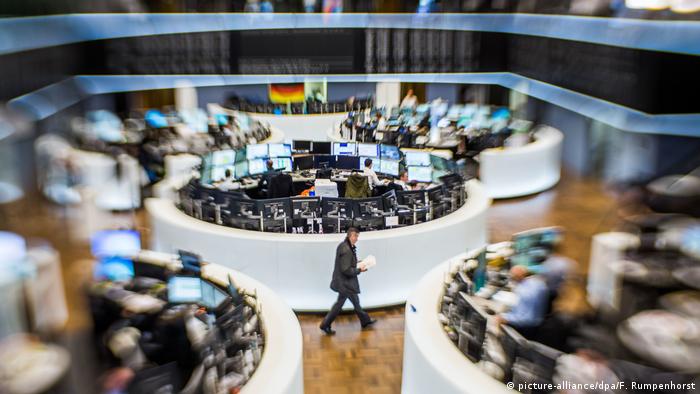 The trading hall at the Deutsche Börse in Frankfurt

Although there have been some changes in the actual composition of the DAX over the past 30 years, it has always contained the 30 biggest listed stock corporations in Germany in terms of turnover and market capitalization.

The list is checked four times a year and, if necessary, adjustments are made: Dresdner Bank has since been taken over by Commerzbank, Mannesmann was taken over by Vodafone and then broken apart. Big retailers Karstadt and Kaufhof haven't made the cut in a long time.

The DAX is supposed to be a reflection of the bigger German economy. But in this regard the index is insufficient, says Dirk Schiereck, professor of corporate finance at the Technical University of Darmstadt. "The mechanical engineering or the construction industries are inadequately represented in the DAX," he criticizes. For this reason he advocates an expansion of the DAX to include 50 companies.

Originally the DAX was modeled after America's Dow Jones Industrial Average index which had just 30 companies. But Frankfurt is not New York. A big part of Germany's economy is made up of family-owned medium-sized companies.

Schiereck also points to the technology sector. "Siemens and SAP as part of the DAX ​​don't radiate much dynamism," he says. If, on the other hand, the DAX was expanded then the assets of Wirecard, United Internet or Software AG would also be represented.

"If the DAX were to include 50 companies it wouldn't be a revolution, but a gradual adjustment," says Schiereck. Because many companies in Germany are not listed, the DAX will never fully reflect the German economy, but the economy would be better represented overall. Engineering would then make up 3 to 4 percent of the index instead of just under 2 percent today.

In a study Schiereck looked at the advantages and disadvantages of the DAX index and concluded that many institutional investors see no need to expand the 30 companies already counted.

On the contrary, many fund managers explicitly said that it is easier to outperform the DAX as things now stood. Of course this is good for the funds, but there are other arguments against an expansion. Some companies that would most likely be elevated into the DAX 30 are not so pleased and would rather be a big fish in a smaller pond than a small fish in the DAX.

The MDAX index lists the 50 next biggest companies anyhow. And the Deutsche Börse plans to broaden this index to include 60 companies ​​by September. Its SDAX index will grow from 50 to 70 companies. But it won't touch the DAX 30.

"It is established, and something established is not so easily thrown overboard," says DSW Vice President Nieding. One reason may well be that if the index was changed then other products based on the DAX data would also need to be updated — in this case 200,000 financial products, including 18 index funds.

And the index has proven itself in practice, says Nieding and advises not only looking at the DAX 30 but also using the MDAX index, which includes more medium-sized companies. Not least of all because the MDAX has gained 180 percent over the past 10 years, while the DAX has "only" risen by 90 percent.