A handful of Germans have purchased an abandoned town in Texas. Not put-off by the state of transatlantic relations, they're turning the hamlet into an art-cum-chill-out space. 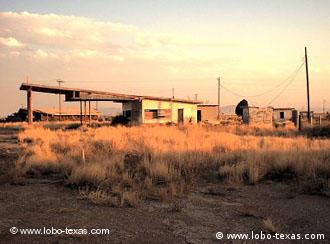 A group of Germans are clearing away the tumbleweeds in Lobo

Three years ago, Alexander Bardorff, the former manager of a popular Frankfurt restaurant, joined forces with two other Germans to purchase an abandoned town in Texas. Ever since then, Bardorff and his partners, Annette Gloser, a curator famous for her free-form art happenings in Frankfurt, and Claus-Peter Mörchen, an IT specialist, have been hard at work turning it into a mecca for alternative Teutonic types they like to call "lobos." Lobo -- not surprisingly -- is also the name of their oasis in the Texan Chihuahua Desert.

And though events in the Middle East have slightly soured German-American relations, these modern-day European pioneers to a state so closely associated with US President George W. Bush won't be put off. As cultural ambassadors, they have a message of their own, even if they won't admit it. 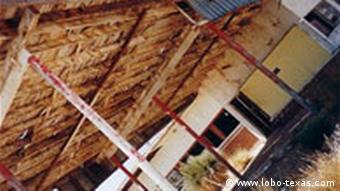 A sign in the gas station window indicated the town was for sale.

So how does one go about purchasing an entire town? It's surprisingly easy, Bardorff told DW-WORLD. Six years ago, on one of his frequent cross-country road trips, Bardorff came upon the ghost town and couldn't help noticing the "town for sale" sign in the window of the gas station. An idea was born: Bardorff returned to Frankfurt and convinced two of his friends, Gloser and Mörchen, to help him cobble together the very affordable $20,000 (€16,300) purchase price.

In October 2001, Bardorff and company became the proud owners of the Lobo, which means wolf in Spanish. To the Germans, Lobo also has another meaning: It's short for "low-life bohemian." Located in the desert-like no-man's land in the region of Texas bordering Mexico, Lobo came with a gas station, motel, general store/post office and five other buildings, all in a terrible state of repair.

Now, the Lobo collective, whose numbers have since grown from three to 15, are still transforming the town into what can best be described as an art-cum-chill-out space. They even held a "town-warming" party last summer, to which they invited neighbors from miles around and served good-old-fashioned German culinary classics, including bratwurst, potato salad and pretzels.

Trying to keep a low-profile

But despite events like last May's fiesta, the "Lobonitos," as they like to call themselves, say they don't have a master plan. Ask about a vision, and they say there isn't one. Bardorff stressed that this wasn't a "commercial venture."

"We don't want to sell anything, we don't want to rent anything, Lobo is not an artists' retreat," said Bardorff. In short, it's just a place for people -- be they writers, artists, musicians or ... IT specialists -- to hang out in the desert and do what they want. 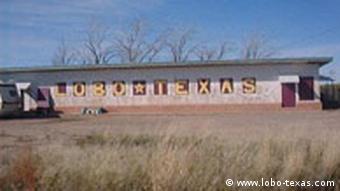 The Lobo founders say they want to keep a low profile.

However, the Lobo Web site tells a slightly different story. There, a manifesto of sorts -- authored by none other than Bardorff himself -- was posted. In a piece entitled "lowlife bohemians vs. bourgeois bohemians," he explained the origins of the Lobo name.

Bardorff referred to "bobos," short for "bohemian bourgeois," a class christened by writer David Brooks in his book, "Bobos in Paradise." Bobos, wrote Bardorff, "leach off the cultural environment created by others."

Lobos, in contrast, "want to restore and revive through their own efforts, actively participating and contributing to the cultural life of their communities. They don't mind eating macaroni and cheese and prefer drinking coffee from an old percolator to a triple mocha latte."

Not a "latte town"

Perhaps Bardorff is afraid Lobo will share the same fate of places like Lambertville, New Jersey, Silver City, Maryland, and -- nearby in Texas -- Marfa. All were founded in the 1970s and 80s by people looking for an alternative to conventional urban centers. Marfa, for example, was the brain-child of American artist Donald Judd.

And all the aforementioned eventually suffered from a second wave of affluent gentrification. Along with money and rising real estate prices, the new residents brought posh bed and breakfasts, restaurants and coffee shops -- turning these places into what Bardorff disparagingly called "latte towns."

Lobo is meant to eventually function as an antidote and refuge for those belonging to the "lobo" creed. For a group that claims to have no master plan, a carefully crafted ideology certainly underpins this project. 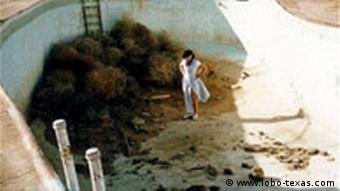 Annette Gloser, in the motel's empty pool, has found creative freedom in Lobo.

For curator Annette Gloser, taking-up part-time residence in the Texas desert also holds the promise of a freedom she found lacking in Germany. A fixture in the Frankfurt art scene and well-known for her impromptu happenings in abandoned and found spaces around her native city, Gloser has dealt with her fair share of zoning and planning restrictions.

In Lobo, no one is bothered by what she does. "I can build and make what I want," Gloser told DW-WORLD. "In Frankfurt, I can't even change something in my garden without getting permission."

In fact, her Texan neighbors have been surprisingly easy-going, said Gloser. In a region so far away from everything, politics doesn't get much lip service. So Germans, despite their chancellor's decision to stay out of the war in Iraq, are welcome here, Bardorff said. "Maybe they talk about the weather, but they never told about politics," he said.

The collective of Germans affiliated with the Lobo project are not the first wave of German immigrants to take up residence in Texas. In a way, they are the avant-garde successors of the thousands of Germans who came to Texas between 1845 and 1900.

In 1842, a group of noblemen formed the Mainzer Adelsverein, better known as the Society for the Protection of German Immigrants in Texas, and purchased tracts of land which they later turned over to German homesteaders. Thus, towns like Fredericksburg, New Braunfels and Boerne, just north and west of the city of Austin, formed the heart of what is today called the "German Belt."

The modern-day homesteaders, however, certainly don't have farming or ranching in mind.

German Art Strikes a Trendy Note in the U.S.

German politicians may be grappling with a loss of image in the U.S. since the dispute over the Iraq war, but artists aren’t complaining as German art enjoys a popularity boom with Americans. (Dec. 2, 2003)

A Perfect Place for Artists

A new cultural concept in the western German town of Essen offers artists free space and inspiration to work on their projects. (August 17, 2004)

The Yearning for Kraut Art

Fresh blood has given the international popularity of German art a boost. Collectors in New York and London these days are eagerly snatching up works by young German artists. (July 29, 2004)