First billed as a women's history museum, London's exhibition dedicated to Jack the Ripper leaves out the real story behind the legendary murderer. But it has managed to shroud itself in great mystery.

Despite its chic and recently gentrified facade, East London remains most famous for one shadowy individual: Jack the Ripper.

The legend of the 19th-century serial killer who is said to have slit the throats of prostitutes before removing their organs has made its way into popular culture through literature, film and television. But he is still one of the greatest mysteries of all time - and a great tourist draw for East London.

On any given day, tour groups can be spotted ambling through the streets of the Whitechapel district, following new clues in Scotland Yard's greatest unsolved case.

A women's history museum was promised

The opening of a museum dedicated to the iconic killer caused quite a stir earlier this month.

Initially billed as an exhibition on women's history, the Jack the Ripper Museum opened its doors on Cable Street, not far from the infamous Ripper's original crime scenes. But the only women whose history it seemed to be concerned with were the victims of the mysterious murderer, whose crimes had uprooted the prudish fabric of the Victorian era.

Women's rights campaigners, who had been looking forward to receiving an institution celebrating the early days of feminism, were disappointed and set up impromptu protests outside the building.

"Anything that appears to glorify the murder of women, especially women in prostitution, is something that we would deplore. We do understand that it was marketed as a museum to celebrate women in East London, such as the suffragettes, so it is understandable that it has caused a lot of confusion and anger," a representative of EAVES, a British charity that fights violence against women, told DW, preferring not to give her name.

A shopkeeper right next door to the museum gave a somewhat different picture of the recent visitor counts. "Right now, it looks like it's a flop," he told DW, preferring not to give his name. "We're still on school holidays and they've only had three or four visitors each day."

Still, the shopkeeper remained optimistic: "I wish them luck. If they succeed it means that I will also profit with my business being right next door." 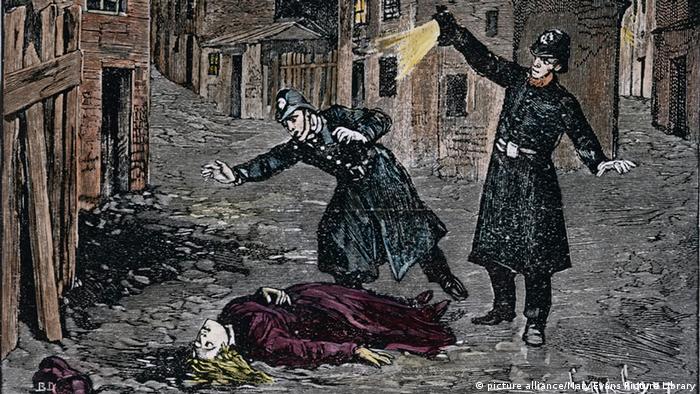 Jack the Ripper has inspired countless works of art, like this drawing from 1888

The exhibition, however, seemed more like a Wikipedia-entry on Jack the Ripper than a house of horror. Smells of old and new permeated the atmosphere, as trains running below and above ground rattled the building and everything in it. Recordings playing eerie chants and street scenes from the late 19th century filled the air on repeat, as visitors walked past a crime scene to a police station to a mortuary in the basement.

Tourists who are looking for a real scare would be better off heading to the Tower of London, which served for centuries as a prison and place of torture.

The real story behind the Ripper era

But when it comes to death, crime and immorality, how ethical is it to turn a profit based on the darkest side of human behavior? While the film industry seems to do it all the time, Russell Edwards, author of "Naming Jack the Ripper," says that too many sensitive issues were overlooked before opening the macabre museum.

"The story of Jack the Ripper is just the tip of the iceberg," said the expert on the serial killer. "The Victorian age is filled with stories of hopeless lives in the East End. This particular area, Whitechapel, was home to scores of people with tragic lives, and they've all been glorified into Jack the Ripper - a legend that focuses on death while stigmatizing these poor women who had no other option in life than to live as prostitutes."

Edwards in 2014 presented forensic evidence on the identity of Jack the Ripper and some of his victims. He said that the initial plans for the Jack the Ripper Museum sounded like they would incorporate a broader perspective on troubles of late-19th-century - like "the reality in those the slums, the destitution on the streets."

"But then it turned into the complete opposite of what it had said it wanted to do," he lamented. "It should have been a museum dedicated to showing the plight of many more people from that particular era, including those of the Ripper victims."

One interactive wall in the museum does highlight some of the social issues of Jack the Ripper's time - briefly addressing issues like the 19th-century housing shortage in the East End and poverty-related health issues - but it appears to be an afterthought.

The discrepancy between the plans for the museum and the result has caught the attention of Mayor John Biggs of Tower Hamlets Council, the local authority. He felt that the decision to open a narrowly focused Jack the Ripper Museum instead of one celebrating the history of women in the borough was disappointing, telling DW, "It has become clear that the council's planning department was misled by the applicant."

Biggs expressed his understanding for the concerns of the local community and said he would be "seeking an explanation from the museum owners as to how this shift in the nature of the museum has come about."

Russell Edwards would also like to have some questions answered. "It almost breaks my heart because I know the descendants of the Ripper victims personally from my own research. I know about the terrible lives their ancestors had to lead before suffering such terrible deaths. These women had no life and no prospects; they were living on nothing and amid this destitution this murderer took their lives and mutilated them," he said.

The architect behind the project, Andrew Waugh, said in an interview with the online portal Building Design that he was "duped" into being part of the project, adding that he would not have "touched it with a bargepole" if he knew what it was going to be turned into.

Meanwhile the museum appears to bask in the mystery it created - not only surrounding the legend of Jack the Ripper, but also in its very own right. The burning question of what purpose the museum is really meant to serve has stirred up nearly as much mystery as its name giver.

Was Nefertiti buried next to King Tut?

Nefertiti has been called the most beautiful woman who ever lived. Now a US-based archaeologist believes he's discovered the resting place of Queen Nefertiti in perhaps the most obvious place of all: beside Tutankhamun. (12.08.2015)