How do those who've slept on the streets see their city? A bold photography project in London challenges people to view the metropolis through the eyes of the homeless and those who've experienced homelessness.

Last month, 105 single-use cameras were handed out to homeless people, or those recovering from homelessness, in London. Tasked with snapping their view of the city, participants came back with 5,000 photos. Of those, 20 were selected for an exhibition and 13 were earmarked for an upcoming 2017 calendar entitled MyLondon.

It's the fourth time that Café Art - a London-based social initiative that offers art opportunities to those affected by homelessness - has launched the project. Last year, 6,000 calendars were sold. The revenues enabled Café Art to start a photography mentoring program.

The MyLondon calendar is being paid for via crowdfunding. Visit its Kickstarter page here, and click through the gallery above for the 13 winning photos and the photographers' personal stories.

DW's Inga Janiulytė spoke to Paul Ryan, the co-founder of Café Art and director of the MyLondon calendar project.

DW: I understand that one of the main goals of the project is to connect homeless people, or people recovering from homelessness, with the public. Why is this important?

Paul Ryan: Our project is about improving self-confidence and self-esteem. When people feel that they have a sense of purpose - for example, when they exhibit their artwork or their photographs - they feel pride and gain confidence. When they have confidence, they can feel that they can do more, whether it's getting a job or getting treatment for an addiction.

Secondly, when they go to do photographs, it can be a pretext to start a talk with somebody. After we print the calendar, we sell it in the [Spitalfields Art Market]. When they're selling it, they can talk with people of different backgrounds. 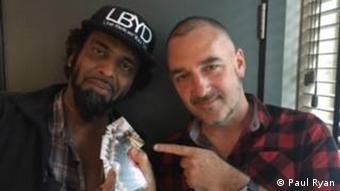 Paul Ryan (right) is pictured with Ray of Light, who participated last year as a photographer and appears this year in a winning photo

The theme of the calendar - MyLondon - is probably also good way to make this connection.

Of course. The photo contest is very open. During the training, we just say to participants, "What is your London and what do you love about London?" We don't ask them to take photos of this and that. They are free to take photos of places, people and objects they like.

Usually in these photographs there are the places the general public loves as well. Somebody might be a company director and they will love a beautiful photo the same way a homeless person does. It will touch people in the same place. Tourists might also enjoy the places and the objects in the calendar as well as the homeless.

Last year somebody commented that you could give 100 cameras to anybody and the photos would be the same. And that may be true. So I replied that if anybody can take these photos, then anyone can be homeless.

We are not trying to say that these people have a special ability, but we are trying to say that these people see London this way. We're not saying they're different because they're homeless. The main issue is not connecting people through the photos, but sharing the story of the people who are homeless or who have had an experience of homelessness.

But there are times the photos that they take can't be taken by anybody else - like if they are taking photos of somebody on the street that may not pose for a professional photographer, but poses for somebody they trust who is in the same situation.

Last year, one photograph was taken in Kensington Gardens, near Kensington Palace, and it was taken right at the sunset. The park would have been closed for the public at that time, but this person had been sleeping in the park overnight and managed to take a photo that nobody else could've taken.

What were the main criteria for choosing the winning photos?

The most important thing was the theme, MyLondon. The judges who selected the photos for the exhibition applied the same professional criteria to all photographers. They didn't know the authors of the pictures or their stories because there was only the contestant's number on the back of the photo. 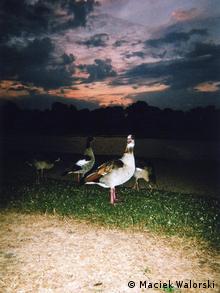 This photo in Kensington Park could only have been taken by a homeless person, says Ryan

After the judges selected 20 photos, we enlarged them and exhibited them in Spitalfields Art Market. The public could vote for the photos they liked most. The picture with graffiti and the dog that got most votes will be published on the cover of the calendar.

Can you estimate how many homeless people are currently living in London?

I think around 2,000 people might be sleeping in the parks at night. But there are different ways of counting homeless people. Also people who've never slept rough, but do sofa-surfing and don't have a proper address, are counted as homeless. I cannot give you an exact number.

Have similar projects been done in other cities?

Last year, we did a lot of publicity and we were contacted by many people from other cities around the world - especially from the United States. At the moment, there is a project called MyNewOrleans. It's an initiative by university students. Another project is taking place in Budapest, Hungary, called MyBudapest. The organization behind it is called Bike Mafia. It's a group of young people that makes sandwiches and then cycles around Budapest giving them to homeless people. They wanted to do a similar project and we helped to connect them with Fujifilm. They gave support in printing photos and gave discounts on cameras.

Last year, I was invited to come and share my experience in Brazil and next year there will be a calendar in Toronto. There is also a group in Sydney, Australia. They are doing MySydney. And hopefully more is coming.

We don't have anybody in Germany yet, but I'm sure one day somebody will do something like this because of the impressive number of German people that supported our project. We found out that they were second after the United Kingdom in buying our calendar online. Personally, I find it just incredibly generous that they support a social project that is in another country.

What advice would you give to those who want to help homeless people?

Homeless organizations always need volunteers. My personal experience is that volunteering in the smaller organizations can really make a difference and they can help people in a huge way. We don't have a lot of resources, but by having somebody come in with a skill - for example, marketing - we can make an impact.

Secondly, it's an area that you really need to understand: what people are like, what their mental issues are, how to talk to people. You have to be experienced or qualified at working with people who are homeless. Before working on this project, I had been working for a legal aid organization in Canada for seven years and got to understand the issues. And after that I could go ahead and do my own things.

July 17, 1936 marked the beginning of the Spanish Civil War. By boldly following fighters to the front with their light cameras, Robert Capa and Gerda Taro became the pioneers of modern war photography. (15.07.2016)

Renowned for his iconic post-war fashion photography, the German F.C. Gundlach also loved to travel around the world with his camera. He's selected 90 of his very best pictures for an exhibition for his 90th birthday. (14.07.2016)

Photos aren't fiction, right? Andreas Gursky's photographic art will make you doubt your eyes - and the way you view images in our world of info overload. His unique works are on display in his hometown of Dusseldorf. (07.07.2016)