To commemorate the 25th anniversary of the fall of the Berlin Wall, the British Museum's "Germany: Memories of a Nation" exhibition offers food for thought to those who think they know Britain's one-time enemy. 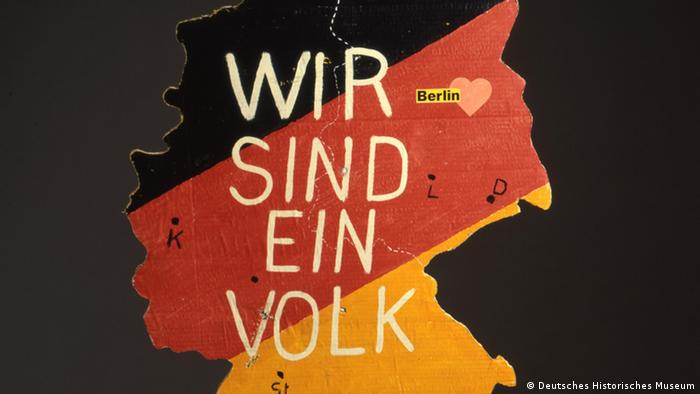 An exhibited flag bearing the inscription, "Wir sind ein Volk" (We are one People)

It's no secret that Germany doesn't have the best image in England. In covering international sporting or political events, British tabloids like to let the symbols of enmity with its 20th century rival resurface: tanks, guns and military uniforms. They serve as frequent reminders of the divided past between these two nations.

But the British Museum's "Germany: Memories of a Nation" exhibition makes a point of avoiding the clichés, instead offering many positive-minded pieces from the last 600 years in Germany history.

Opening the exhibition is a map of a reunified Germany in black, red and gold, bearing the words "Wir sind ein Volk" (We are one people). In 1989, demonstrators in East Berlin famously held a sign with the same message.

That version of the German flag is significant because of the special message it conveys, says Barrie Cook, curator of the exhibition. The poster is on loan from the German Historical Museum in Berlin. Cook says the organizers chose to use German unity as a starting point for the exhibition because many people can still remember the relevant events, having witnessed them personally. 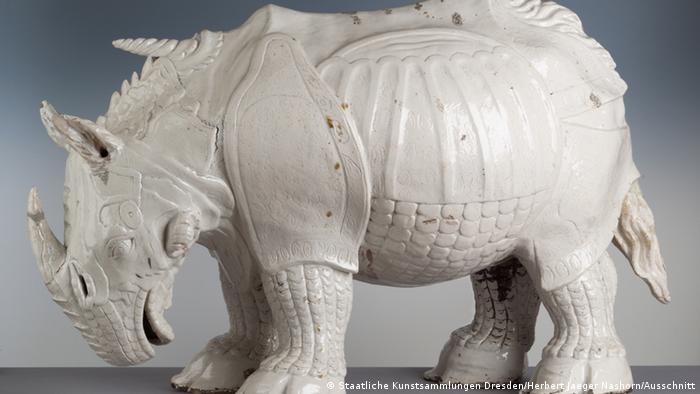 In the exhibition, a porcelain rhinoceros, modeled after a template by Albrecht Dürer

Germany is a new country, and a new country needs a new history, commented the director of the British Museum, Neil MacGregor, in an interview with "Radio Times." The Scottish-born director says he is on a mission to change the British perception of Germany - and encourage people to reflect on it.

That helps explain why a blue wetsuit is included in this look back at German history. The suit is emblematic of some East Germans' decision to try and escape to freedom not by climbing the Berlin Wall, but by navigating the Baltic Sea - despite fears of freezing to death or being shot. 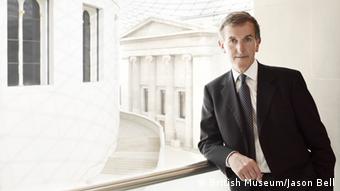 Guests may also wonder about a porcelain rhinoceros included in the showcase. The template for the sculpture stems from a 1515 creation by Renaissance artist Albrecht Dürer. MacGregor says the template is one of 10 objects that reflect modern Germany. Craftsmen and women at Dresden's famed Meissen porcelain manufactory create the rhinoceros based on Dürer's model, even though the artist never saw a rhinoceros himself. That didn't stop him, notes MacGregor, from creating a wonderfully detailed and charming version of the animal.

All triumphs aside, the exhibition cannot disregard the darkest chapter in Germany's 20th century history. Curator Barrie Cook reflected on the difficulty of presenting the Holocaust in the exhibition - saying the experience of doing so as an outsider offered him insight into how difficult it must be for Germans themselves to grapple with this element of their past. 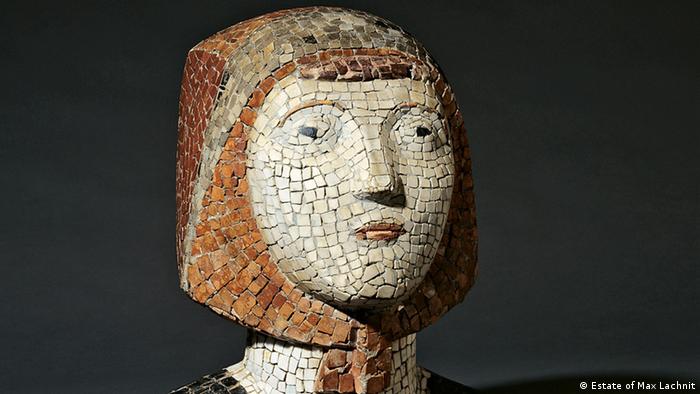 The exhibition includes a replica of the concentration camp gate from Buchenwald bearing its original inscription "Jedem das Seine," a bitterly cynical slogan that could be translated as, "To each, that which he deserves." The original gate was designed by a prisoner in the camp. Prior to his encampment, he had been a pupil of the Bauhaus school.

The reconstruction that began after 1945 is also a part of the exhibition. It includes Max Lachnit's colorful mosaic "The Trümmerfrau" (The Rubble Woman), made of hundreds of pieces of marble and basalt the artist collected from the rubble left behind in Dresden. Museum visitors can also experience the astronomical clock from inside the Strasbourg Cathedral. Though no longer part of Germany's territory, cities like Strasbourg, Basel, Kaliningrad or Prague are also featured at the British Museum.

Many of the exhibited items, which span five centuries of history, are on loan from German museums. Some of the displayed items are traveling outside of Germany for the first time. The exhibition concentrates on pieces that shape Germany's identity through to the present and showcase the country's history. Museum director MacGregor says having at least a sense of Germany's perspective is essential to understanding today's world. 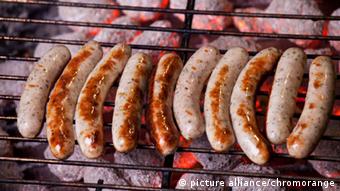 A cliché or two is also on the agenda...

Taking to the airwaves

MacGregor treads new ground with the exhibition in a number of ways, having partnered with BBC for a 30-part radio series. As of mid-September, the museum director has described a piece of German history on the air each week. Topics include the Brandenburg Gate, Gutenberg's printing press, the poet Johann Wolfgang von Goethe as well as the Volkswagen Beetle's cultural influence.

Of course, a few German clichés - including Bratwurst - have to be included. MacGregor talks about the myriad of German sausage choices, whose staggering variety he says can even compete with that of French cheeses.

How Germans celebrate their national holiday

October 3 marks the "Day of German Unity" ever since the GDR and West Germany reunited in 1990. Since then, the day is celebrated as a public holiday - but the festivities are less excessive than one might think. (03.10.2014)

The place where Thomas Raufeisen was unfairly imprisoned and interrogated is today his place of work. As a witness who experienced this prison first hand, he guides visitors through East Germany's central remand center. (09.10.2014)

Germany: Memories of a Nation