While the rest of the world focuses on globalization, ever more Germans are embracing regionalism by paying for goods and services with local currencies. Munich is next in line as it prepares to accept the "regio." 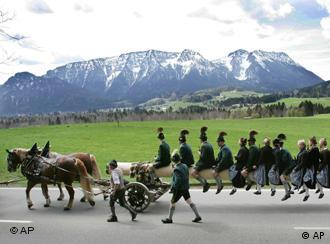 Local identity and regional patriotism are writ large in Bavaria

Germans appear to have a fondness for alternative currencies. It started with the "roland," which was first used in shops in Bremen six years ago. Outside of Munich, people can pay in "regios," which will become an accepted currency in Bavaria's capital in spring.

The regio is a reaction to the growing difficulties small farmers, butchers, bakers and organic stores have to compete with discount retailers. It is also an attempt to do something for their towns and villages. The participants employ a new method of payment to keep money and added value in the region.

Of course, the regio isn't legal tender, but rather a voucher that is traded against the euro at an exchange rate of one to one: 10 euros for 10 regios. Fans of local currencies say the advantage is that the vouchers are only valid in a limited area, among companies that produce or sell goods or services locally, so that they help to protect jobs. 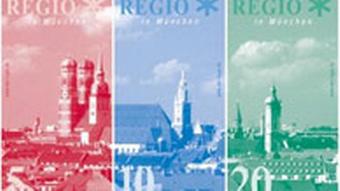 Munich is supposed to get the regio in spring

Since the "roland" was launched in Bremen six years ago, around 20 more regional currencies have taken off in Germany. Another 30 are being planned, despite the fact that there's no tangible advantage for consumers.

Merten said 15,000 regios were already in circulation, and around 60 businesses had agreed to accept them. Consumers can buy five, 10, and 20 regio notes at various locations in the area.

But one main difference to the euro is that people can't get their money's worth if they save regios. After a year, a 10-regio note is only worth nine euros, since every three months it loses 25 cents in value. To retain the currency's value, the holder must paste the current quarter's validity stamp to each note.

The idea is that regios will change hands more quickly if it's not viable to save the currency, and businesses and their employees will feel the positive effects of faster consumption.

Plans for the regio go well beyond Munich. Organizers in southern Germany want three different local currencies to be exchangeable for one another.

It's a unique development when it comes to German regional currencies, according to Isabella Weiss, one of the Munich organizers. Weiss said three places in Bavaria with their own regios -- Munich, Bad Tölz-Wolfratshausen and the Ostallgäu region -- were in the process of forming a currency network. 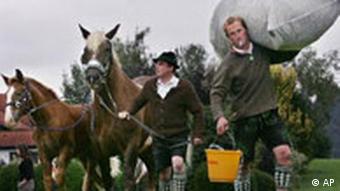 Local businesses are meant to profit from the regio

"That means that the Munich resident, when he goes to Wolfratshausen (38 km or 24 miles from Munich) over the weekend, can see there where can I go drink a beer and pay with the regio?" Weiss said.

There's one big disadvantage to regional currencies. Financially weak families usually can't afford to use them, since they must then shop in local stores, which tend to be more expensive than nationwide discounters.

That's why critics, such as Gerhard Rösl, formerly an economist at Germany's central bank, describe local money systems as the utopian ideas of "social romantics."

For the first time, the euro surpassed the US dollar in terms of the number of banknotes in circulation. Despite the euro's strength, European citizens remain skeptical, blaming it for making things more expensive. (29.12.2006)

What Does it Mean to Be Poor in Wealthy Germany?

This month’s publication of a new report on poverty in Europe has attempted to prize open a nation of resolutely blind eyes to a harsh reality of life in contemporary Germany: life on the breadline. (14.12.2006)

Massive shopping malls built outside towns and cities have rung the death knell for many German city centers. One town is hoping to buck the trend by minting its own currency and luring back shoppers. (21.01.2006)

Munich prosecutors are investigating a train crash that killed five near the Alpine resort of Garmisch-Partenkirchen. Three rail employees are under criminal investigation, with a full technical probe also underway.