Living in Berlin: "Poor but sexy"

Like New York, Berlin doesn't sleep. Bars and clubs are open around the clock, and culture seekers will be spoiled with opportunities to see new exhibitions and stage shows opening daily. 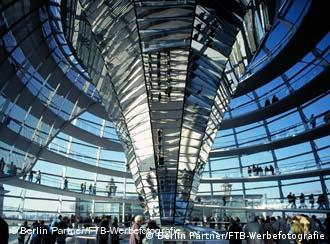 Berlin is always wide awake. You can find something to do in some part of the city day and night, whether it's work or entertainment. So it's no surprise that the German capital has become a magnet for young students from all over the world. In the bars of trendy neighborhoods like Prenzlauer Berg, Friedrichshain and Kreuzberg, you can hear not only German being spoken, but also English, Spanish and other languages.

The mayor of Berlin, Klaus Wowereit, has described the city as "poor but sexy." It's a fact that the city attracts many students, young artists and musicians from all over the globe, as living here is more affordable than in many other major cities. In recent years, a spot in a dorm costs on average of 200 Euros ($262) per month. Even shared housing and apartments of one's own are relatively cheap and easy to find.

Every single day, Berlin offers new exhibitions and theater, dance and opera productions on renowned stages and in small venues. Not only is the choice great, but the prices are relatively low, as well. Students are usually entitled to a discount and many museums have special designated times when they can be visited for free.

The city also offers endless possibilities for the sports enthusiast. From soccer to sailing, almost anything can be done as a university sport - and it doesn't cost too much money either. What's more, there are numerous lakes and recreational areas around Berlin. Students can easily reach these spots with their semester ticket, which gives them access to all buses and trains in the Berlin area.

To help newcomers find their way through this plethora of possibilities, Berlin's universities offer mentor programs and introduction seminars. These aim to not only help the students with their academic problems, but also to help them get to know the city and not take those infamous "Berlin grumps" seriously. After all, Berliners do have a reputation for being rather brash.