Priced high to begin with, Line shares shot up even further in value in its first day of trading. The chat app's emojis have made it a hit in Asia, and investors seem confident that it's success will spread. 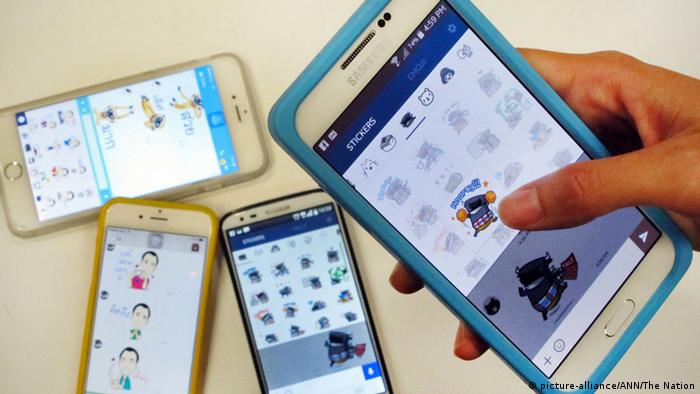 Line's initial public offering was expected to be big, with investors hungry for a juicy technology IPO. The Japan-based messenger app company priced its shares at the high end of its original estimates amid heavy demand, raising about $1.3 billion in the share flotation.

And the hype was confirmed on Thursday as Line shares hit the New York Stock Exchange, where they surged 40 percent in opening trading.

They also got off to a bang in their first day of trading in Tokyo on Friday, where shares surged 32 percent from their introductory price.

Altogether, this makes Line's public offering the largest technology IPO of the year, showing that investors think the app has promising growth potential despite fierce global competition from the likes of WhatsApp and Facebook Messenger.

Owned by South Korean Internet provider Naver, Line is widely used in East and Southeast Asia, as well as in Spain and Mexico. Similar to Messenger and WhatsApp, the app allows users to make free calls, send no-charge instant messages and post photos or short videos.

It offers a host of other services as well, such as games and a mobile payment service. The company seeks to transform Line into a "lifestyle platform" with which, for instance, users can order groceries and stream music.

But what has set Line apart so far are the cute cartoon "stickers" that friends can send to each other while chatting online. Some are free, while others cost a few dollars. Line's sticker shop sells thousands of stickers, many featuring popular characters such as Hello Kitty and Super Mario.

There's also a "Creators Market," allowing people to create and sell their own stickers on Line's online store.

The service launched in 2011 as a tool for people to communicate in the aftermath of Japan's disastrous quake and tsunami, which damaged the country's telecom services.

Line has since grown to be used by 218 million active monthly users globally, with more users in Japan than Facebook and Twitter. But it has some catching up to do with its global messaging app competition. WhatsApp boasts around a billion users, and Facebook Messenger has around 900 million.

The stock offering is meant to raise money to help Line finance an expansion in Asia, and tap the US and European markets, where Line is not yet a major player.

Line's revenue rose 40 percent last year, though it booked a loss, which it blamed on rising staff costs and other expenses.

The Future of Messenger Apps

Messenger apps have now moved well beyond exchanging texts and images. Soon, users will be able to shop, pay bills and transfer money through WhatsApp, WeChat and Line. (09.02.2016)

How new messenger apps may change how you use them

Messenger apps have now moved well beyond exchanging texts and images. Soon, users will be able to shop, pay bills and transfer money through WhatsApp, WeChat and Line. (20.10.2015)

Countries with the most users of Line mobile messenger: Shift Ranking of September 12