European Union foreign ministers have agreed not to renew an embargo on arming Syrian rebels. However the compromise exposed deep divisions among the bloc’s member states on how to deal with the conflict in Syria. 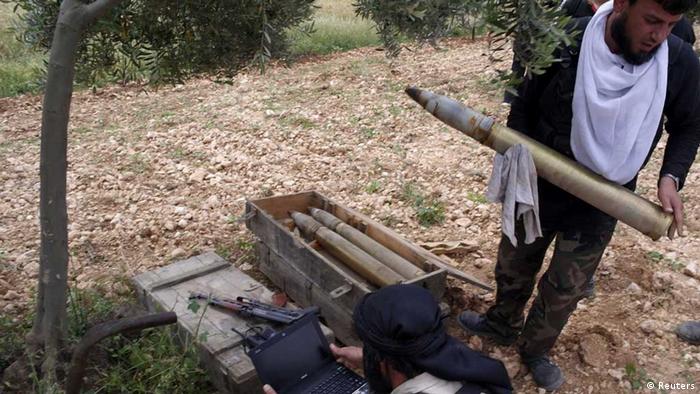 The deal announced after several hours of wrangling between the EU's foreign ministers at a meeting in Brussels late on Monday will see the 27-member bloc's embargo on arming Syrian rebels expire at the end of this month. At the same time though, they agreed to maintain a package of sanctions against the regime of Syrian President Bashar al-Assad.

Despite the agreement, the foreign ministers were not actually able to reach a consensus on whether the EU should arm the rebels - leaving this issue to be decided by each individual state.

A joint statement released at the end of the meeting said members states "would proceed in their national policies" with regard to whether to supply the opposition Syrian National Coalition with military equipment.

British Foreign Secretary William Hague saw the decision to the lift the arms embargo as a victory for London's position, saying this would send a "strong signal" to Assad.

"This decision today gives us the flexibility in the future to respond to a worsening situation or to the refusal of the Assad regime to negotiate," Britain's foreign secretary said.

No arms shipments until at least August

However, he also echoed the foreign ministers' joint statement, saying Britain had "no immediate plans to send arms to Syria." This statement said no EU country would deliver any military hardware to the war-torn country for the time being. It is understood that this could change as soon as August, by which time the foreign ministers are to review their position.

This is meant at least in part to give Russia and the US more time as they try to convince Syria's opposition coalition to take part in peace talks the two major powers are hoping to convene in Geneva.

What began as protests to topple Syria's regime in March 2011 has developed into a civil war. The UN says over 80,000 people have been killed. Read DW's multimedia coverage and analysis of the conflict in Syria. (25.05.2013)

After Monday's compromise was announced, German Foreign Minister Guido Westerwelle stressed the importance of keeping up the pressure on the Assad regime.

"The fact that the package of sanctions is being continued is an important signal by Europe against violence," Westerwelle said.

His sentiments were echoed by his Dutch counterpart, Frans Timmermans. "At least 90 percent of the sanctions are still there," Timmermans said. However, he also expressed skeptism that the move would help improve the situation on the ground in Syria.

"Quite a lot of arms are already going to the wrong hands," he noted. "The parties to the conflict don't have a shortage of arms, frankly."

Austrian Foreign Minister Michael Spindelegger was the most outspoken of those who continue to oppose the idea of lifting the arms embargo, a position championed by both Britain and France.

Spindelegger described the decision to allow the embargo to expire as "against the principles" of Europe as a "community of peace."

Monday's deal followed reports that US Republican Senator John McCain had met with Syrian rebels after having slipped into the country from Turkey. A spokesman for the former US presidential candidate, who advocates arming the rebels, confirmed that the meeting took place but provided no further details.