Libyan military sweeps into Tripoli to drive militias back to Misrata

Libya's military has swept into Tripoli to sweep out militiamen. Locals angered by the numerous armed groups seizing control of various corners of the country have met the belated official response with a warm welcome. 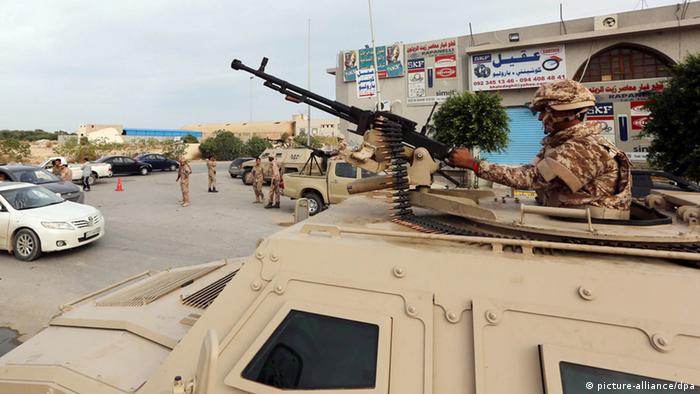 On Monday, army troops moved into Tripoli, set up checkpoints and roamed the streets. The Defense Ministry sent out broadcasts asking locals for support.

"The government urges citizens to cooperate with the army units and provide them with all the help needed to achieve security and stability in the nation's capital," the ministry announced.

Militias have defied the weak central government, acting as a law unto themselves. The move to rein in such armed groups risks detonating an explosive backlash leading to outright battles between pro- and anti-government groups. As many of the militias are rooted in specific cities, any violence could pit region against region in an already fragmented nation.

On Sunday, officials from Misrata, Libya's third-largest city, urged the speedy "withdrawal of all ex-rebels from the city of Misrata who are in Tripoli." On Monday, the militiamen indeed began withdrawing as dozens of soldiers and armored vehicles deployed in the capital.

Also on Monday, EU foreign ministers expressed concern over the situation. The most recent unrest began on Friday, when former rebels from the western city of Misrata fired on protesters, triggering clashes that killed 43 people and wounded 450.

The attack prompted a three-day strike in Tripoli by residents to prompt the government to act against militias. The groups blamed for the killings reportedly withdrew from Tripoli Saturday.

"The EU is concerned by the significant deterioration of both the political and security situation in Libya and condemns the violence in Tripoli on 15 November which resulted in the tragic loss of life among civilians," the foreign ministers said in a joint statement.

"The EU urges all parties to avoid further bloodshed and refrain from further violence," they added. "The EU underlines its commitment to support the Libyan authorities and emphasizes the need for the Libyan government and General National Congress to work jointly, within an agreed institutional framework based on the Constitutional Declaration, to achieve a peaceful and democratic political transition in a united Libya."

The ministers also reiterated the EU's commitment to supporting Libya in its transition toward democracy and urged the authorities to report human rights violations, including against migrants, and to bring those responsible to justice. They offered further help in assisting the government with destroying unsecured stockpiles of arms and munitions from the Moammar Gadhafi era that "pose a significant threat to the stability and security" of Libya and to its neighbors.

Security spokesman Essam al-Naas said that as troops were deployed, militias withdrew from their positions in four districts of the capital and returned home. He reported one skirmish in eastern Tripoli - in an area called Wadi al-Rabie, or the Spring Valley - when members of the Misrata militia fired on a Tripoli-based group that had demanded they surrender their weapons before leaving. However, he had no news of casualties.

Militias originated in the brigades that fought against Gadhafi in Libya's 2011 revolution. They have refused to disarm and have grown in size and power. Too weak to disarm the militias, the government has tried to co-opt them, paying them to take on security roles such as guarding districts, facilities, and even polling stations during elections.

On Monday, the US announced it would train 8,000 Libyan soldiers. Defense Department spokesman Colonel Steve Warren said the US would teach troops basic general purpose skills.