Libyan Islamists stand to gain with or without Gadhafi | World| Breaking news and perspectives from around the globe | DW | 24.03.2011

Libyan Islamists stand to gain with or without Gadhafi

An alleged dual British-Libyan jihadist has been paraded in front of the international media to support the regime's claim that the revolt against Gadhafi's 41-year rule was being directed by al-Qaeda. 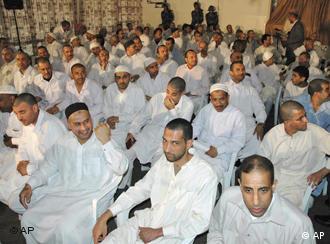 Libya has put the spotlight on the fact that it may be one of the Middle Eastern and North African countries where militant Islamists emerge strengthened from the Arab struggle to throw off the yoke of authoritarian rule.

Salah Mohammed Ali Abu Obah, a 43-year old Manchester resident, said he was a member of the Libyan Islamic Fighting Group (LIFG), an al-Qaeda affiliate founded by Libyan fighters in Afghanistan. He said he had been detained earlier this month by Libyan security forces in the town of Zawiya, west of the capital Tripoli. Abu Obah described himself as a low-level LIFG fundraiser.

Abu Obah's statements did little to substantiate Gadhafi's claim but fuelled Western concerns that jihadists and militant Islamists were playing a key role in the Libyan revolt unlike elsewhere in the world where they have largely been relegated to the sidelines. Abu Obah noted that the LIFG had broken its ties to al-Qaeda in 2007 around the time that its imprisoned leaders engaged in serious dialogue with the regime as part of the government's rehabilitation program.

"The part of the LIFG that I am with does not belong to al-Qaeda," Abu Obah said.

The LIFG alongside dissident elements of the Libyan armed forces are the only two groups within the Libyan opposition with battle experience. The Libyan jihadists fought a bitter insurgency in eastern Libya in the 1990s.

Many of the Islamist fighters who are facing off against Gadhafi's forces were released from prison last year as part of the government rehabilitation program that was overseen by Gadhafi's son, Saif al-Islam, in which they repented their ways, but did not fully renounce violence.

Analysts said the jihadists' role in the struggle to topple Gadhafi would strengthen their position irrespective of what the outcome is of the battle for Libya. They said the fighters' attitudes once the battle is over would constitute a litmus test for government rehabilitation programs in several Arab countries, including Saudi Arabia, Yemen and Mauritania. The Saudi program has so far had an 80 percent success rate. 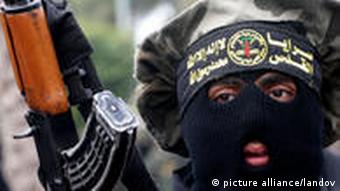 Jihadists stand to gain from the Libyan uprising

Western fears that many of the rehabilitated and escapees may revert to their old ways were reinforced by the recent refusal of Sheikh Ali al-Salabi, the prominent Libyan cleric who oversaw the LIFG's ideological rehabilitation, to mediate an agreement between Gadafhi and the rebels. Al-Salabi's refusal was backed by prominent Saudi cleric Salman al-Auda, a reformed militant, and Egyptian Muslim Brotherhood spiritual leader Yousef Qaradawi, who both had earlier supported Gadhafi's rehabilitation effort.

"The real threat to US security is flying under the radar. The fate of once-jailed Islamist fighters who are now at large should be among Washington's top concerns. Islamists freed by Gadhafi and those who escaped from prison during the uprising are now able to operate in an environment of evaporating state control, abundant small arms caches, and under-guarded stocks of chemical warfare agents," Christopher Boucek, an analyst with the Washington-based Carnegie Endowment for Peace, told Deutsche Welle.

Opposition leaders have stressed that their revolt is nationalist rather than Islamist in nature irrespective of the fact that LIFG fighters have joined their battle. "If there's one thing you should remember, it's that this is a people's revolution, a secular revolution," said Khaled Ben Ali, a spokesman for the 13-member rebel national council.

Analysts concede that the Islamists participation in the fight does not necessarily change the nature of the revolt, but cautioned that it remained to be seen whether they had truly broken with their jihadist past.

"They may no longer feel obliged to keep up their end of the bargain with a weakened government - a government many never accepted as legitimate in the first place. Violent Islamists have long sought to bring down the hated Gadhafi regime - just as they have looked to topple other 'apostate' governments in Egypt, Tunisia, Saudi Arabia, and Yemen - and some may now see this as their best opportunity to overthrow the government," Boucek said.

A weakened or partitioned Libya could become a breeding ground for jihadists engaged in a low-level insurgency against the remnants of the Gadhafi regime, officials and analysts said, noting that jihadists flourish mostly in failing rather than failed states.

"There is ... the risk of division within the country and the risk of seeing a failed state in the future that could be a breeding ground of extremism and terrorism, so obviously this is a matter of concern," NATO Secretary-General Anders Fogh Rasmussen said at a recent meeting of NATO defense ministers. 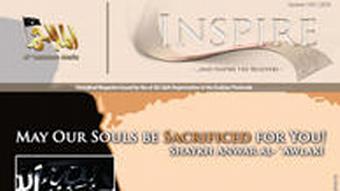 Libyans constitute the third-largest contingent of jihadists in Iraq after Iraqis and Saudis. Several Libyans also graduated to senior positions in al-Qaeda, including Abu Yahya al-Libi, the group's chief ideologue and a potential successor to Osama bin Laden. The LIFG, which attempted to assassinate Gadhafi on three different occasions, posed the greatest threat to the Libyan leader's regime prior to the popular revolt.

A US diplomat noted in a US embassy cable disclosed by Wikileaks in 2008 after a visit to the eastern Libyan city of Derna, home to many Libyan jihadists, that they were focused less on attacking Western targets than on undermining the Gadhafi regime.

The diplomat said the militants believed that the US and Europe were supporting Gadhafi after his 2003 renunciation of weapons of mass destruction. They saw participation in the Iraqi jihad against US forces as "a last act of defiance against the Gadhafi regime," the US diplomat wrote in the 2008 cable.

Noman Benotman, the London-based former LIFG leader who was one of the group's negotiators with Saif al-Islam, warns that eastern Libya hosts a younger, more radical group of Islamist militants who see jihad as a religious obligation.

Nonetheless, Benotman suggested that Gadhafi's pinning of the revolt against his regime on al-Qaeda meant that former LIFG fighters feared that they may be targeted by the Libyan leader's forces.

"The last time I was in contact with some members was when I was in Tripoli on the 16th or 17th of February," Benotman told Deutsche Welle." They themselves are afraid of their personal security, because they think they will be a target of the regime, and maybe assassinated or framed for some act of terrorism. So I think they are going to hide, because they start to believe they are a direct target for the regime's security forces."

With the US sinking $150 million (110 million euros) into the fight against al Qaeda, it's taking a tough stance on the terror group in Yemen. But is President Saleh actually interested in removing them from Yemen? (22.03.2010)

In recent weeks, Yemen has become the new buzzword in the fight against international terrorism. While experts agree the Arabian peninsula nation has an al Qaeda presence, its current threat level remains low - for now. (26.01.2010)

Two incidents involving the trafficking of drugs to Europe have highlighted concerns about links between Islamist militants and drug-trafficking militants in Latin America. (20.01.2010)