Team BORA-hansgrohe's Lennard Kämna is considered a Tour de France contender should the event take place. In an interview with DW, the cyclist discusses concerns for the future and his experiences with virtual racing. 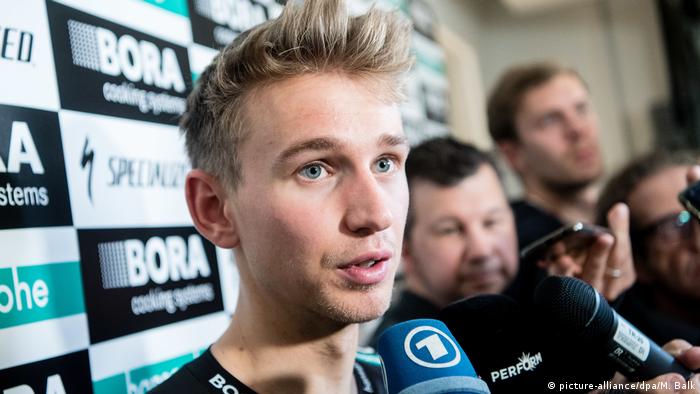 DW: The Digital Swiss 5 was your first digital race. What was it like having a competition in your own living room?

Lennard Kämna: It was rather different. You look out the window, see the sunshine, yet you’re cycling here in your living room and see your competitors only on the screen. That was quite unusual, and I hope that we will soon be able to switch back to normal means of racing again.

What’s different between racing on the street and VR?

It just feels totally different. You’re not really riding in a peloton [ed: main body of riders in a race]. It’s more like you’re competing against yourself even though you have some virtual competitors to your left and to your right. There’s no slipstream, and all the cycling strategy is gone. When you’re doing VR you simply go full-out. In a normal race other factors count such as where you position yourself among the riders or also the ability to have the “vision” to know when to let up sometimes in order to conserve energy. None of that up to now matters in VR. 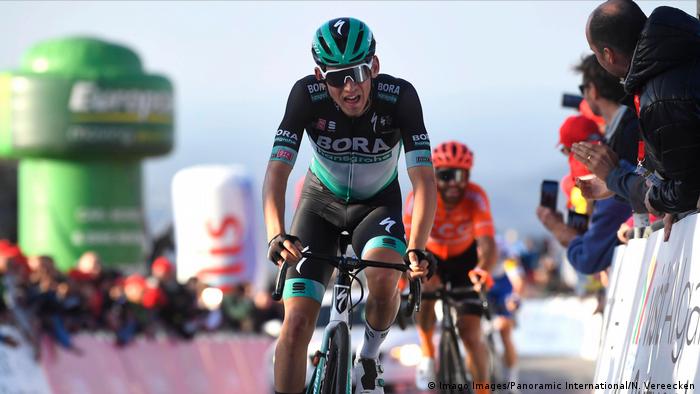 Kämna competing in the Volta Algarve in February shortly before the world of sports was brought to a standstill.

You’re a strong time-trials cyclist. This type of racing should actually suit you…

Yes, actually it should. However, static cycling is somewhat different. You can’t utilize the qualities you have when you’re on a street bike, especially when you’re not used to VR. You get too hot when you’re doing indoor cycling and there’s no slipstream. It’s a whole different ball game. That’s why you can’t set the same standards for the two. There are a couple of riders who can do VR just as well as street racing or even achieve better results than on the street. It’s more the opposite for me. I do worse in VR. That’s why VR isn’t exactly made for me.

Yes, that was impressive. I finished more than 11 minutes behind which was rather depressing. Compared to me I’m sure he’s feeling right at home doing VR.

In times of the Covid-19 pandemic cycling is prohibited at some places. Should VR expect a boom now?

I think there’s a big future for VR in amateur cycling. After work when it’s already dark you can do indoor cycling and even VR racing. It’s especially an alternative in the winter time. However, I believe it is not ideally suitable for professional cycling. It’s a nice diversion for now, but it lacks the flair of a true road race.

Because of the pandemic all major cycling events have been cancelled until the beginning of August. With cycling-race organizers in financial trouble and racers‘ salaries cut, is professional cycling in trouble?

If racing really will start up again in August, then we’ll get through it. However, if at that point everything will be cancelled, then there would be considerable damage. Some teams would be able to get by one year without racing. My racing team is well positioned and has good sponsors who are already covering our backs. However, it will be very, very difficult for professional cycling should racing still not take place in 2021.

Are virtual races the way to get out of the crisis?

I consider that highly unlikely considering my first experiences with it. Of course, you can always try it out, and VR really does fill a void which has been created because of Covid-19. However, I don’t think that VR could replace the entire professional cycling calendar of racing events.

Lennard Kämna was born in 1996 in Fischerhude, near Bremen in northern Germany. He started cycling at an early age. He was quickly noticed after winning the Men’s Junior Individual Time Trial at the UCI (International Cycling Union) Road World Championships. In 2017 he was signed as a professional by Team Sunweb, becoming at age 20 the youngest professional cyclist on the WorldTour. After finishing second at the UCI Nations’ Cup Under-23 championship in 2017, a lot of observers felt Kämna was about to make his breakthrough into the big league. However, some setbacks, including illnesses that forced him to take a break from the sport, prevented that. However, at his first Tour de France in 2019 Kämna did show he was worth the wait, finishing twice in the Top-10 in the mountain stages. Kämna joined Team BORA-hansgrohe in 2020.

This interview was conducted by Joscha Weber.